Learning vocabulary is very important for SSC CGL exam, as this not only helps in understanding new words but also helps to get a better hold on the English Language. Read the Hindu Vocabulary for SSC exam daily on SSCadda and Adda247 app and try to use these words in the course of the day to remember them. Along with reading the meaning of the words, it is important to remember it’s Synonym and Antonym for SSC CGL Exam. 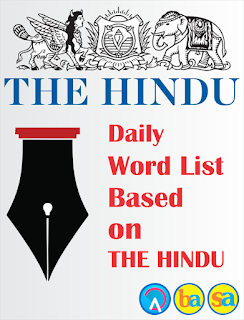 1.Empirical
Meaning: based on, concerned with, or verifiable by observation or experience rather than theory or pure logic
Synonym: observed, seen, factual, actual,
Antonym: theoretical
Sentence: “they provided considerable empirical evidence to support their argument”


2.Talisman
Meaning: an object, typically an inscribed ring or stone, that is thought to have magic powers and to bring good luck.
Synonym: lucky charm, charm, fetish, amulet, mascot
Sentence: “those rings, so fresh and gleaming, were their talismans”:

3.Taciturn
Meaning: (of a person) reserved or uncommunicative in speech; saying little.
Synonym: untalkative, uncommunicative, reticent, unforthcoming
Antonym: talkative, loquacious
Sentence: “after such gatherings, she would be taciturn and morose”

4.Tantamount
Meaning: equivalent in seriousness to; virtually the same as.
Synonym: equivalent to, synonymous with
Antonym: different, opposite
Sentence: “the resignations were tantamount to an admission of guilt”

5.Inculcate
Meaning: instill (an idea, attitude, or habit) by persistent instruction.
Synonym: infuse, impress, imprint, introduce
Antonym: eliminate, remove, take away
Sentence: “I tried to inculcate in my pupils an attitude of inquiry”

6.Scurrilous
Meaning: Making or spreading scandalous claims about someone with the intention of damaging their reputation.
Synonym: abusive, vituperative, derogatory, disparaging
Antonym: clean, decent, moral
Sentence: “a scurrilous attack on his integrity”

7.Superannuation
Meaning: regular payment made to a fund by an employee towards a future pension.
Synonym: allowance, annuity, grant, payment, premium
Sentence: “had he agreed to resign, he would have been entitled to his superannuation for 29 years’ service”

10.Covenant
Meaning: an agreement., agree by lease, deed, or other legal contract.
Synonym: accord, deal, bargain, settlement
Antonym: disagreement, denial, misunderstanding, refusal
Sentence: “there was a covenant between them that her name was never to be mentioned”


9 out of every 10 candidates selected in SBI PO last year opted for Adda247 Online Test Series.