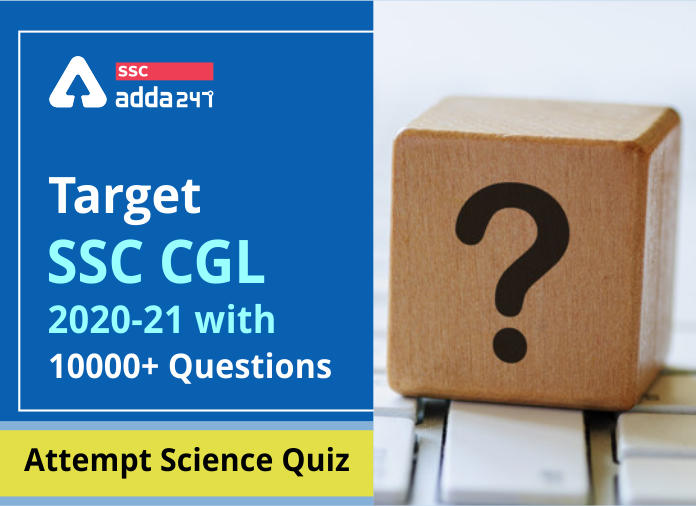 This is the new year with new goals, new experiences and lots of exams to be scheduled soon. SSC CGL has recently released the exam dates so now it is time to gear up your preparations and try hard to get success. ADDA247 never fails to deliver something new and fruitful for you all. This time also we are providing you the best study plan as well as a study material. We are here going to prepare your General Science section for the SSC CGL. In this article, we are providing you the details that how we are going to help you to clear the examination this year. We ADDA247 is going to provide you daily tests for all the subjects. The topic-wise quiz will be done from January till April. This will help you to get a deeper knowledge of all the topics and will prepare you thoroughly.

Q2. The atomic number of which of the following elements is greater than that of iron?
(a) Manganese
(b) Cobalt
(c) Calcium
(d) Chromium

Q3. Atoms of the same element having different mass numbers are called?
(a) Isobars
(b) Isotopes
(c) Isotones
(d) Isomers

Q4. _ is a by-product of sewage treatment and can be decomposed to produce biogas?
(a) sewage
(b) sludge
(C) sewer
(d) scum

Q7. Which of the following is not a chemical change?
(a) Burning of paper
(b) Digestion of food
(c) conversion of water into steam
(d) Burning of coal

Q8. Tartaric acid is not found in?
(a) Tamarind
(b) Grapes
(c) Unriped mangoes
(d) Spinach

Q9. In an acid-base reaction which product is produced along with a Salt?
(a) Hydrogen gas
(b) Oxygen gas
(c) Carbon dioxide
(d) Water

Q10. The material used in the electric heater is?
(a) Tungsten
(b) Nichrome
(C) Brass
(d) Steel

S1.(c)
Sol.
Electrons in the highest energy level of an atom are called Valence electrons or outermost shell electrons. Only these electrons participate in chemical bond formation.

S2.(b)
Sol.
The atomic number of cobalt is greater than that of iron.

S3.(b)
Sol.
Atoms of an element having the same atomic number are known as Isotopes.

S4.(b)
Sol.
Sewage treatment involves three stages.
Sludge is a semi-solid residue produced in the first step during the treatment of sewage and wastewater.

S8.(d)
Sol.
Tartaric acid is found in tamarind, grapes, and Unriped mangoes. While oxalic acid is present in spinach.

S9.(d)
Sol.
When an acid reacts with a base, then Water and salt are formed as products. This reaction is called as “Neutralisation Reaction”.

S10.(b)
Sol.
The material used in the electric heater is Nichrome. Nichrome is a mixture of Nickel, Chromium, and iron.