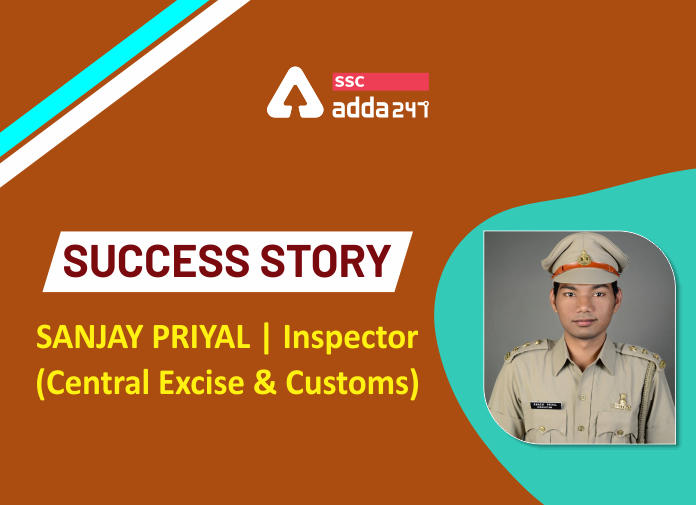 Here is the Success story of Sanjay Priyal and the strategy adopted by him in his own words as shared with Adda247.

Everyone has a story and every story is Inspiring. Though more than 4 years have already passed still I would like to share my Success story with all of you not to show what I have achieved but only to motivate my other friends who are still going through this hardest phase of their life. If even one per cent of my success story helps anyone to succeed, then it will be a matter of great happiness & satisfaction for me. I can understand their pain, “the pain of unemployment”.

I belong to Patna (Bihar). During my School & College days, I was an above-average student. But one thing that stands me out or that had kept me afloat was my consistency, hard work, and resilience.

I could have easily fabricated my success story, but that would spoil the purity. I want to keep it as real as I can. My journey for SSC CGL started in the month of June 2014. During 2013-14, I was preparing for jobs in the technical field and In March 2014, I met an old college friend, who was already preparing for SSC CGLE as soon as he graduated. He explained everything about CGL jobs in that meeting. Since childhood, my parents wanted me to become a government officer in the future but I did not know how to become one. I also wanted to fulfil their dream. When that friend told me about the jobs under SSC CGLE, I realized that this was the way to be what I wanted to become since childhood. I was completely fascinated after getting aware of the job profiles under CGLE. One very important thing: the sooner we get a sense of our strength, the better it is. So, it’s better to realize what you cannot do as soon as possible. To change your life, you need to change your priorities. The same thing I did and focussed more on CGLE preparation and continued to read technical as well. Now, all I needed was the right mentor who could direct me towards the right approach. When you know what you want, and want it bad enough, you will find a way to get it. The first thing which I did was to join the coaching for Test Series only as I had good basics of Maths & English. I appeared for CGLE’14 and made it to the DEST (Typing) round but couldn’t make it to the final merit list by 15-20 marks. Success consists of going from failure to failure without loss of enthusiasm. So, I didn’t lose enthusiasm. I always had a feeling in me that failure will never overtake me if my determination to succeed is strong enough. There is no elevator to success. You have to take the stairs. Before appearing for CGLE’15 in August 2015, I took 100+ Mock Test of CGL Pre with much seriousness and analyzed it too. In almost every mock test, I scored in the range of 145-155 but In CGLE’15 pre I got the toughest paper (Offline Mode) and I could score only 116. Now I was far below in the rank list. But I want to tell you that one should not give excuses for his/her failures. If I had made excuses for the tough paper and luck then I would not have tasted the Success. The way to get started is to quit talking and begin doing. I did the same thing.

One should remember that if plan A fails, there are 25 more letters. As CGLE’15 pre proved to be a failure for me, Now, I had to be more diligent, disciplined and accurate during the process of preparation for the mains. Hard work can always beat intelligence. “Samay har samay ko badal deta hai, Bas Samay ko thoda samay chahiye.”

I sat for CGLE’15 mains in Oct’15 and scored 328/400 (P-I + P- II). It really compensated for the failure in Prelims very well. At this point, I want to say that Tier-II of CGL Exam proved to be a game-changer for me and you should also learn from this that after getting fewer marks in T-I, I did not stop and kept on preparing for the mains. Tier-II will always be a crucial stage of this Exam, So I would suggest to start preparing for mains after clearing the basics and for the Prelims, one can start the preparation 2-3 months before the Exam date.

29th JUNE 2016, the day on which I got a call @ 9pm and heard a voice addressing me as “Inspector Saheb”.  It was the same person on the other side who had once made me aware of the SSC jobs. I was thankful to him earlier and still, I am.

SUMMARY OF MY JOURNEY:–

I took lots of exams during my journey until I got a job. Whether the exam was small or big, I used to appear in every exam seriously. Remember one thing, “All the Study you are doing will be worth it in the end”. I got some benefit from every exam. By taking exams, we get a sense of the level of competition, paper pattern, enormous knowledge, Competitive environment etc. The Exams which I took during the journey were:

After facing a series of failures, some by very narrow margin and some by more, the time came when I reached a very good level and out of the above Exams I could Successfully Clear SBI Clerk (3rd Attempt), IBPS PO (4th Attempt), Railway JE 2014 (Gorakhpur Zone), Railway JE 2015 (Mumbai Zone) and finally On 29th June 2016, SCC CGLE 2015:- Inspector (Central Excise). The results of the above exams were awaited and therefore I had to sit for further exams.

MOTIVATION:– Regardless of the destination, it is very important to have motivation. We should know that if we want to get there, then we should have the answer to it why. The biggest motivations for me were my neighbours and relatives, although they used to talk demotivating things only (Kya Kar Rahe ho Ajkal? Kuch hua ya ni tumhara? Koi naukri mili ya abhi bhi khali baithe ho?), but I used to look at the other side of their talks and felt very good thinking about it. I used to think that if I had really achieved anything big, then their sleep of the nights and day’s rest would be blown away and ultimately they would be burnt into ashes. “Jeetne ka maza tab aata hai jab tumhe harne ka dard aur dar pata ho. Jitna Mushkil Sangharsh Hoga Jeet Utni Hi Shaanadaar Hogi.”

STRATEGY WHICH I ADOPTED:–

DO’s: Showing off is the fool’s idea of glory. Just Stay Foolish & Stay Hungry. Fake It Until You Make It! Act As If You Had All The Confidence You Require Until It Becomes Your Reality. By this, I mean that your thoughts and state of mind directly affect your behaviour.

NOTE:- Everyone has different strategies. Here, I have explained the strategy which I had adopted. It may suit some of you and may not suit others. So, it’s up to you what strategy you want to adopt. Ultimately, the things that benefit someone are the best for them.

Lastly, I want to extend my heartiest gratitude to my parents, siblings and friends for their unwavering faith in me till I reached the Success line.

Adda247 has started a platform www.achieversadda.com exclusively for achievers where they can interact with other achievers and can make new friends. So, if anyone is looking for personal guidance from toppers, they should immediately visit achieversadda.com