Although the Constitution has made an effort to allocate every possible source of revenue either to the Union or the States, but this allocation is quite broad based.  For the purpose of allocation of certain sources of revenue, between the Union and the State Governments, the Constitution provides for the establishment of a Finance Commission under Article 280.  According to the Constitution, the President of India is authorized to set up a Finance Commission every five years to make recommendation regarding distribution of financial resources between the Union and the States.
Constitution 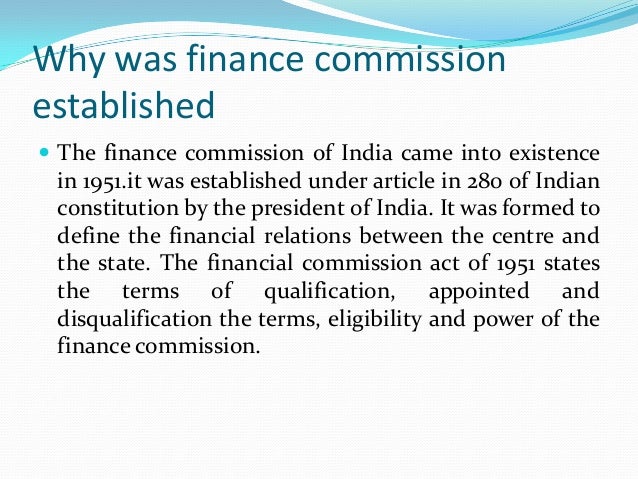 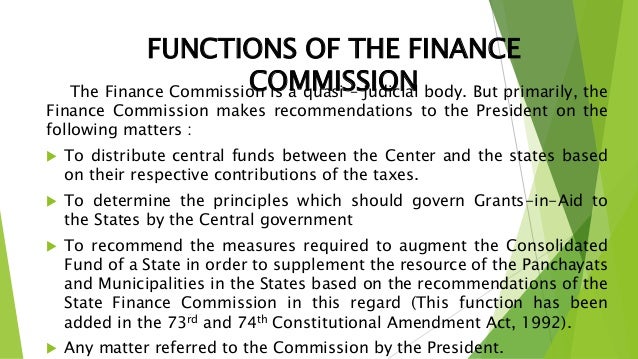 The Finance Commission recommends to the President as to the distribution between the Union and the States of the net proceeds of taxes to be divided between them and the allocation between the States of  respective shares of such proceeds; the principles which should govern the grantsin-aid of the revenue of the States out of the Consolidated Fund of India ,the measures needed to augment the
Consolidated Fund of a State to supplement the resources of the Panchayats and Municipalities in the State any other matter referred  to the Commission by the President in the interest of sound finance.
STATE FINANCE COMMISSION
Article 243I of the Indian Constitution prescribes that the Governor of a State shall, as soon as may be within one year from the commencement of the Constitution (Seventy-third Amendment) Act, 1992, The State Finance Commissions are constituted once in five years to review the financial position of the local bodies and to recommend principles governing the distribution of finances between the states and local bodies and measures needed to improve the financial position of the local bodies. As per the constitutional requirement, states made the provision in the state panchayat raj/municipal Acts for the constitution of State Finance Commissions. Most states, however, have left it to the state governments to prescribe the details of composition, qualifications, term, etc. The states have mostly incorporated the constitutional provisions in their Acts. In some cases the details of the composition, working procedures and other related aspects were also incorporated in Acts or Rules framed there under. In some cases certain qualifications have been prescribed and others they were left open. This resulted in wide variations between the State Finance Commissions and left much scope for variations in their appointment, organization and working.
The principles which should govern:
The distribution between the State and the Panchayats of the net proceeds of the taxes, duties, tolls and fees leviable by the State, which may be divided between them under this Part and the allocation between the Panchayats at all levels of their respective shares of such proceeds; The determination of the taxes, duties, tolls and fees which may be assigned as, or appropriated by, the Panchayats; The grants-in-aid to the Panchayats from the Consolidated Fund of the State; The measures needed to improve the financial position of the Panchayats: Any other matter referred to the Finance  Commission by the Governor in the interests of sound finance of the Panchayats. Article 243Y of the Constitution further provides that the Finance Commission constituted under Article 243 I shall make similar recommendation vis-a-vis municipalities.
The Governor is required to cause every recommendation made by the State Finance Commission together with an explanatory memorandum as to the action taken thereon to be laid before the Legislature of the State.