In this exam, 100 questions will be asked from General Engineering (GE) section. We are providing quizzes on alternate basis- Electronics & Telecommunication Engineering / Physics / Computer Science and Information Technology (CS IT). It will help you to score good in GE section.The Examination will be held from 20th to 25th November 2017 in a computer based pattern.

Q8.The motion on a curved path, when one component of velocity is constant and the other is variable is called?
(a)Projectile motion
(b)circular motion
(c)vibratory motion
(d)spin motion 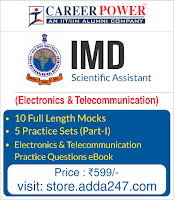