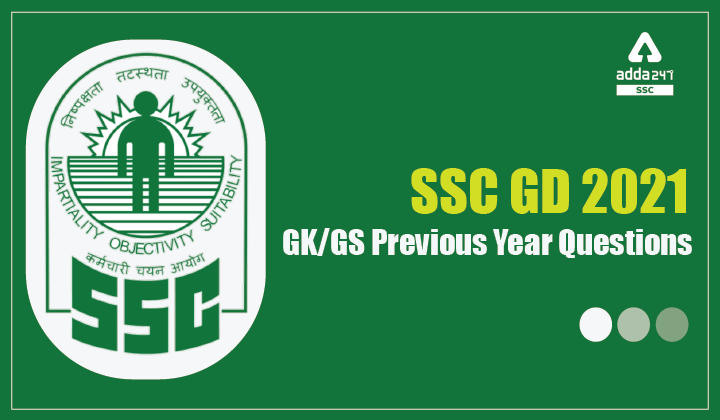 Staff Selection Commission has released the official notification on its website @ssc.nic.in for the recruitment of SSC GD Constable 2021. Staff Selection Commission released the notification on 17th July 2021. The Admit Card for the SSC GD Constable exam 2021 has been released on the official website. The online examination is scheduled from 16th November to 15th December 2021.

As the SSC GD examination date is out, candidates who are preparing for the SSC GD 2021 must pull up their socks and get ready for the examination. We are here to help you score more and achieve your dreams. We are providing you the General Knowledge and General Science  Questions for the candidates preparing for SSC GD 2021 Exams. GK/GS is the most scoring and contains 25 questions for 50 marks. Candidates can refer to the following video for all the questions related to GK/GS.This questions are very much helpful for all the candidates who are appearing in the SSC GD 2021.

These are the questions for your preparation:

2. Where is the headquarter of UNESCO?

3. Who built the Jagannath Temple?

4. Which is the longest river in India?

6. Where is the headquarter of WHO?

7. Which state of India is covered with maximum dense forests?

8. Where is Gateway of India?

9. By what name is the winter harvest season known in India?

10. Which Indian Cricket Player has received the most wickets in Test cricket?

11. What is the river flowing through Tibet in India?

12. What is the minimum age to become the Governor of a State?

13. Where is Kullu Valley situated?

14. In which of the areas is the Machkund Power Project located?

15. Which mountain ranges separate the southern and northern parts of India?

16. Which of the places is famous for Jain Caves?

17. Who was the first woman President of Congress?

18. The political and cultural centre of Pandya Rulers is?

19. Who was the first woman astronaut in the world?

20. The Sundarbans are mainly protected for which wildlife?