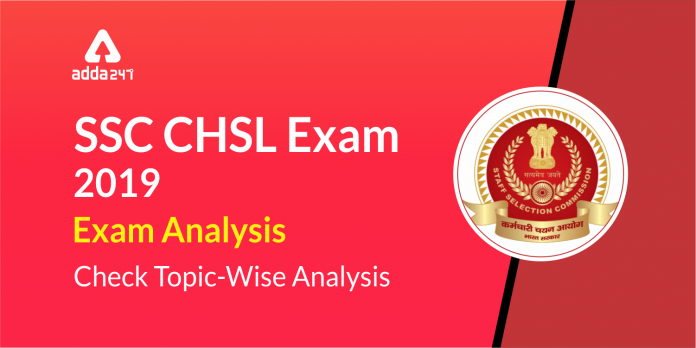 SSC CHSL 2018-19 Tier 1, the exam conducted for the recruitment to Group C and D posts, has started off from 1st July. The SSC CHSL exam, conducted in multiple shifts includes 100 questions to be attempted in 60 minutes. Thorough practice will definitely help you sail your boat in SSC CHSL Tier 1 exam. As the exam for some of the students is over now, its time to analyze the SSC CHSL 2018-19 exam. We are providing the detailed shift-wise analysis for the SSC CHSL Tier 1 exam along with the number of questions asked from each topic, the difficulty level of each section and the good attempts required to ace this exam. Stay tuned for exam analysis other shifts and we wish all the best for students appearing in the upcoming shifts.

English Language in SSC CHSL exam may give nightmares to some while its an easy task for others. In SSC CHSL Tier-1 Exam 2018-19, English language section was of easy to moderate.

The Quantitative aptitude section needs time management as the questions asked may be time-consuming for many aspirants considering advance and arithmetic maths. In SSC CHSL Tier-1 Exam 2018, Quantitative Aptitude was of moderate.

The General Intelligence and Reasoning section is always considered easiest of all sections in the SSC exams. Candidates should try to attempt above 20 in this section to score good marks. In SSC CHSL Tier-1 Exam 2018, General Intelligence(Reasoning) questions was easy-moderate.

SSC CHSL Admit Card 2020 For Tier 1 To Be Released Soon on ssc.nic.in