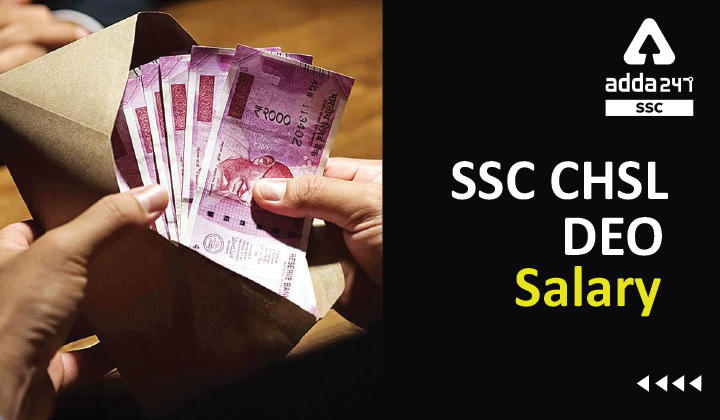 SSC CHSL DEO Salary 2022: Staff Selection Commission conducts Combined Higher Secondary level examination for recruiting 10th and 12th Pass candidates on different posts of central government like Lower divisional clerk, postal assistant, data entry operator, and data entry operator grade ‘A’. SSC CHSL 2022 notification was released by the Commission on 1st February 2022 at its official website, before applying to the recruitment an aspirant must find out about the post available for the recruitment like salary structure, career growth, etc. Many aspirants who want to apply for the recruitment this year, must be wondering what is the salary, perks, and allowances provided to the candidate after getting selected as Data Entry Operator in the government department. Through this post, we will try to clear all your doubts regarding SSC CHSL DEO Salary 2022.

Staff Selection Commission is about to release SSC CHSL 2022 Notification on their official website i.e.ssc.nic.in. Every year SSC releases more than 4000 vacancies for this recruitment examination. This is a great opportunity for the young aspirants who are 10th and 12th pass and have a desire to serve under different Ministries/ Departments/ Organizations of the Government of India. In the table provided below, you can check important information regarding notification.

A Data Entry Operator gets appointed in the pay band Level 4 on the pay scale of  Rs. 25,500-81,100 and in the pay band Level 5 for which the pay scale is Rs 29,200-92,300 with different perks decided by the central government like house rent allowance, transport allowance, dearness allowance, leave travel concession, and other allowance applicable to the post. In the table below, we have provided the in-hand salary of a newly appointed data entry operator.

Click here to check SSC CHSL Salary for other posts

After getting selected as a data entry operator, the government expects its employee to handle job responsibilities provided below for the department.

A departmental exam known as SAS is conducted by SSC for giving promotion to a data entry operator. If the person doesn’t appear for the SAS  exam, there is a promotion directly after every 8 years of service.

Q.What is SSC CHSL DEO’s salary?
The candidates selected as DEO will work in the pay band of LVL 4 for which the salary structure is 25500-81100.

Q.What is the job profile of SSC CHSL DEO?
Aspirant selected as DEO will have to handle tying work in the department