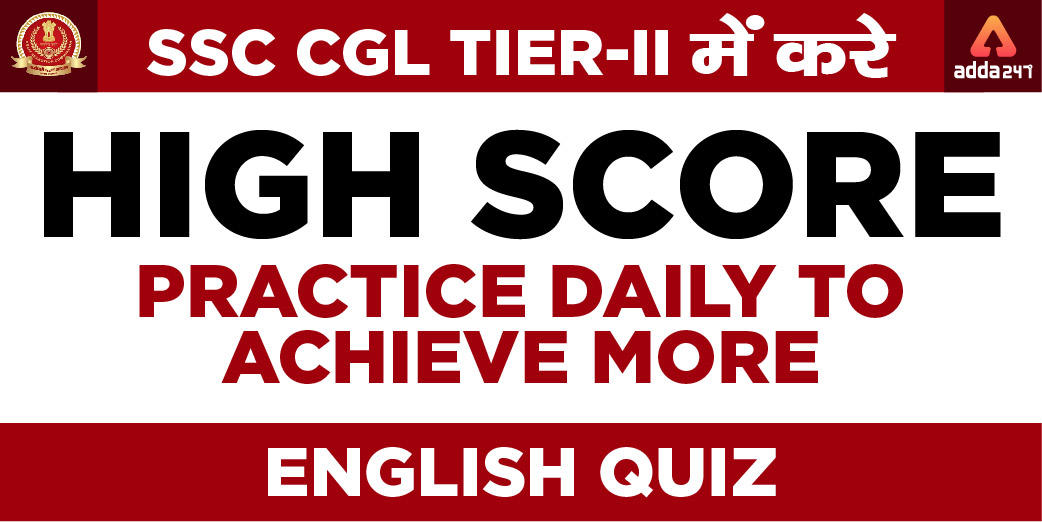 Q1. Women walk miles on the blazing sands in search of an (elite) pot of water.
(a) elusive
(b) elated
(c) effusive
(d) No Improvement

Q2. Celebrity (cuts both the ways), of course, and the benefits do not always outweigh the disadvantages.
(a) cuts either way
(b) cuts the both ways
(c) cuts both ways
(d) No Improvement

S2. Ans.(c)
Sol. Cut both ways is an idiomatic expression which means to have a mixed effect, have advantages and disadvantages.

Q3. It (transported) that the couple were among many passengers travelling under assumed names, which along with stowaways led to confusion when calculating the final death toll of around 1,500.
(a) transpired
(b) tantalized
(c) touted
(d) No Improvement

S3. Ans.(a)
Sol. Transpire: (of a secret or something unknown) come to be known; be revealed.
Tantalize: torment or tease (someone) with the sight or promise of something that is unobtainable.
Tout: to advertise, talk about, or praise something or someone repeatedly, especially as a way of encouraging people to like, accept, or buy something.
Hence option A is the correct choice.

Q4. The courts accept that (abstruse of) these privileges can only be made by statute but nonetheless there is considerable scope for judicial definition of limits.
(a) abortion of
(b) abrogation of
(c) abduction of
(d) No Improvement

S4. Ans.(b)
Sol. Abrogation: the repeal or abolition of a law, right, or agreement.

S7. Ans.(b)
Sol. Prepositions are not supposed to use before ‘Today, yesterday, tomorrow’.

Q8. (It is the) security environment in the neighborhood coupled with the pressure brought by the Comprehensive Nuclear Test Ban Treaty that forced India out of the nuclear closet.
(a) It was the
(b) It was a
(c) It was
(d) No Improvement

S8. Ans.(a)
Sol. The sentence is in Past Tense hence ‘It was’ will replace ‘It is’. Now a ‘noun’ takes definite article ‘the’ before it when associated with a relative pronoun (here, the relative pronoun is ‘that’)

Q9. Illness, injury, food poisoning, grief- any of these things can (prostate) people or lying down in a helpless position.
(a) prostrate
(b) prospect
(c) prosecute
(d) No Improvement
S9. Ans.(a)

Sol. Prostate: A gland which is a part of a man’s reproductive system.
Prostrate: to make helpless or defenseless.
Prospect: to inspect (a region).
Hence option A is the correct choice.

Q10. Even after being sentenced to life in prison, the (impenitent) man was not sorry for his crimes.
(a) compunctious
(b) contrite
(c) insular
(d) No Improvement
S10. Ans.(d)
Sol. Impenitent: not feeling shame or regret about one’s actions or attitudes.
Compunctious: Feeling or expressing regret for one’s sins or misdeeds.
Contrite: feeling or expressing remorse at the recognition that one has done wrong.
Insular: ignorant of or uninterested in cultures, ideas.
Hence No Improvement is required.