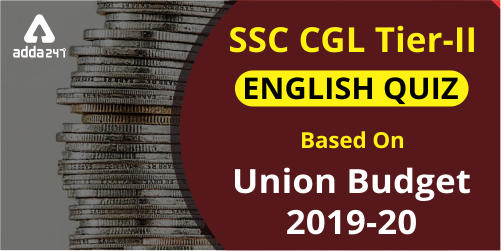 Direction (1-5): In the following passage, some of the words have been left out. First read the passage and try to understand what it is about. Then fill in the blanks with the help of alternative given.

Finance Minister Nirmala Sitharaman presents the_________ budget of the second Narendra Modi government in the Lok Sabha on July 5, 2019. The Minister says the government will focus more on agricultural infrastructure. “Ease of doing business and ease of living should apply to farmers.” She ______ zero-budget farming, as a model for farmers. “Steps such as this can help doubling farmers income.” Zero-Budget farming is natural farming which is _________ chemical-loaded nor organic with its reliance on manure. It’s a form of gardening as a self-sustainable practice with minimum external intervention. This concept of zero budget natural farming (ZBNF) was first ________ 25 years ago by Subhash Palekar as a movement for farmers who were ________ due to the Green Revolution.

S1. Ans.(c)
Sol. The correct word to put in the blank is ‘maiden’.
Maiden: being or involving the first attempt or act of its kind.

S2. Ans.(b)
Sol. Propose: put forward (a plan or suggestion) for consideration by others.
Hence option B is the apt choice.

S5. Ans.(d)
Sol. In debt is the correct idiomatic expression to use which is also befitting the subject of the given passage.
In debt: the state of owing money.

Direction (6-10): A passage is given with 5 questions following it. Read the passage carefully and choose the best answer to each question out of the four alternatives.

In the press conference of the Budget, Minister Nirmala Sitharaman says the government is progressively moving towards bringing in all industries under corporate tax. She cites the new National Education Policy. National Research Foundation to assimilate all research grants given by different ministries independent of each other. Massive Open Online Courses through SWAYAM has been successful, she says. She proposes the programme Study in India to bring in foreign students.

Draft legislation for setting up of Higher Education Commission will be presented later this year. 10 million youth to take up industry-relevant skill training under the Kaushal Vikas Yojana.
Over 81 lakh houses at investment of Rs. 4.83 lakh crore have been sanctioned and construction has started in about 41 lakh houses, under PMAY-Urban. More than 95% of all cities have declared themselves open defecation free. Rashtriya Swachchta Kendra is to be inaugurated at Gandhi Darshan on October 2, 2019. Metro Rail initiatives are to be enhanced by encouraging PPPs and faster completion. Dedicated freight corridor is almost complete.

Q7. Draft legislation for setting up of Higher Education Commission will be presented?
(a) after two years
(b) last month of next year
(c) later this year
(d) after two months

Q9. According to the passage, more than 95% of all cities have declared themselves ______________?
(a) corruption free
(b) open defecation free
(c) technically equipped
(d) bank account holding states