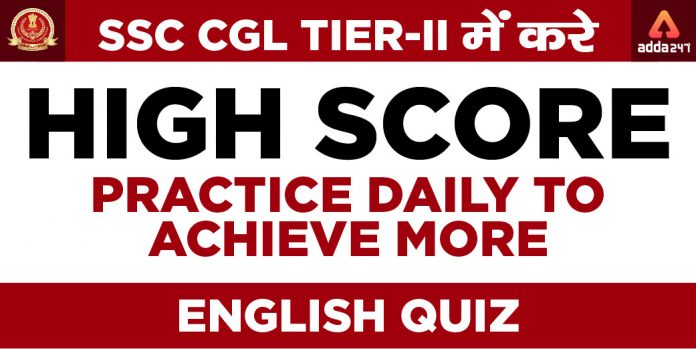 Direction (1-10): In the following questions, out of the four alternatives select the alternative which best expresses the meaning of the idiom/phrase.

Q3. Put one’s foot in one’s mouth
(a) to have an interest in something
(b) succeed in doing something where there was a risk of failure
(c) to unintentionally say something foolish, tactless, or offensive
(d) to work every possible way to succeed.
S3. Ans.(c)

Q5. In cahoots with
(a) to support someone weak
(b) in a partnership usually for a dishonest reason
(c) back to something that you don’t want to do
(d) something that turns out to be good which earlier appeared to be wrong
S5. Ans.(b)

Q6. Bow and scrape
(a) to stop yourself from saying something because it would be better not to
(b) a type of situation where you must choose between two equally unpleasant situations
(c) to try to do something that is hopeless
(d) try too hard to please someone in a position of authority
S6. Ans.(d)

Q7. Sitting duck
(a) a person or thing with no protection against an attack
(b) to own a major share in a business partnership
(c) completely alone
(d) reveal the secret
S7. Ans.(a)

Q8. Song and dance
(a) to have an interest in music and dance
(b) a fuss or commotion
(c) to be excited
(d) to treat someone with all due respect
S8. Ans.(b)