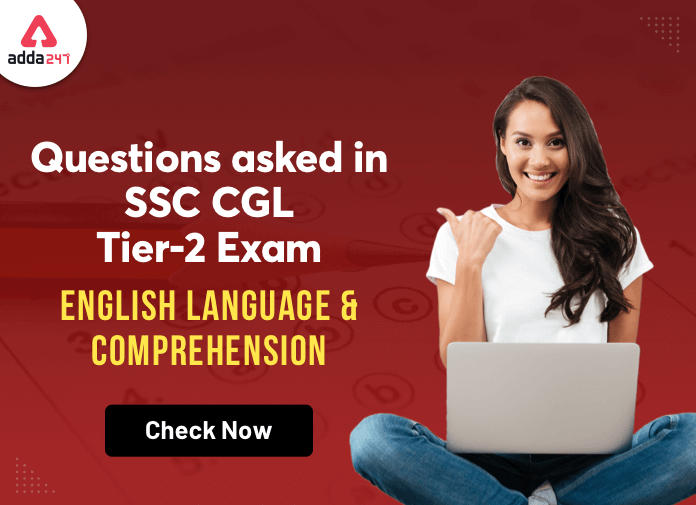 SSC has released its CGL 2020-21 notification on the 29th of December 2020 @ssc.nic.in. So, students must know about previous years’ cut-off, shortlisted criteria for SSC CGL 2020-21. The SSC CGL TIER I was conducted across the country from 13th August to 24th August 2021 to recruit 7035 vacancies in Grade B and C in various Government Ministries and Departments. Soon SSC will conduct the SSC CGL tier 2 Examination on 28th & 29th January 2022. In this article, we will be covering the English language section where we will discuss the English questions that were asked in the previous SSC CGL Tier-2 Exam.

The English language and comprehension section consisted of 200 questions with 200 marks. The candidates had a time limit of 120 minutes or two hours. Let us look at the questions that were asked in this section in November 2020.

The Headmaster with all his senior teachers have come to attend the meeting.
The teacher said that the building adjacent with his house needed repairs.
Air polution,together with littering,are causing many problems in our cities.

Directions (1-2): Identify the best way to improve the bold part of the given sentence. If there is no improvement required, select ‘no improvement’.

Q1. He was a regular target for solicitor of funds.
(a) solicit
(b) solicitation
(c) solitude
(d) No improvement

Q2. Dozens of political activists have been round for questioning.
(a) rounded about
(b) rounded up
(c) rounded to
(d) No improvement

Directions (5-6): Select the word which means the same as the group of words given.
Q5. Study of sounds
(a) Arsonphobia
(b) Acoustics
(c) Astrophobia
(d) Arrhenphobia

Q6. A person who is excessively concerned with minor details and rules or with displaying academic learning
(a) Belligerent
(b) Emeritus
(c) Truant
(d) Pedant

Q7. Select the most appropriate idiom (in the context) to ﬁll in the sentence.
No, I had no idea they were planning to get married. They must have reached that decision ____________.
(a) under the rose
(b) under the dome
(c) under the roof
(d) under the sun

Q8. Select the most appropriate idiom (in the context) to ﬁll in the sentence.
His colleague had cautioned him to calm down and not ___________.
(a) pretend airs
(b) assume fire
(c) pretend fire
(d) assume airs

Q13. Select the most appropriate synonym of the given word.
Devote
(a) Allot
(b) Treasure
(c) Repetition
(d) Instant

Q14. Select the most appropriate synonym of the given word.
Manifest
(a) Hopeful
(b) Distinct
(c) Fearless
(d) Calm

Directions (15-16): In the following questions, a sentence has been given in Active/Passive Voice. Out of the four alternatives suggested, select the one which best expresses the same sentence in Passive/Active Voice.

Q18. Select the most appropriate synonym of the given word.
Deliberate
(a) Recluse
(b) Intended
(c) Deduce
(d) Furious

Q20. Select the word which means the same as the group of words given.
Able to use both hands equally well
(a) Polyglot
(b) Ambidextrous
(c) Bibliophile
(d) Utopian

S1. Ans.(b)
Sol. Replace ‘solicitor’ with ‘solicitation’. Here we are taking about the act of asking for or trying to obtain something from someone. Thus option B is required.
S2. Ans.(b)
Sol. Round-up means to bringing together of people, animals, things, etc.
S3. Ans.(c)
Sol. Battalion is the correct spelling.
S4. Ans.(b)
Sol. Parallel is the correct spelling.
S5. Ans.(b)
S6. Ans.(d)
S7. Ans.(a)
Sol. Under the rose: Privately, confidentially, or in secret.
S8. Ans.(d)
Sol. Assume airs: to think or behave as though one is superior to others or better than one really is.
S9. Ans.(d)
Sol. No error
S10. Ans.(a)
Sol. Ought + to + have: This construction is used in relation to past action of duty that was not fulfilled or an action that was neglected in the past. Hence, replace “had been” with “have been”.
S11. Ans.(a)
Sol. Scurrilous: making or spreading scandalous claims about someone with the intention of damaging their reputation.
Discreet: careful and prudent in one’s speech or actions, especially in order to keep something confidential or to avoid embarrassment.
Hence option (a) is the correct choice.
S12. Ans.(a)
Sol. Spurious: not being what it purports to be; false or fake.
So, ‘Original’ is the correct antonym of ‘spurious’.
S13. Ans.(a)
Sol. Devote: give all or most of one’s time or resources to (a person or activity).
Hence option (a) is the correct choice.
S14. Ans.(b)
Sol. Manifest: clear or obvious to the eye or mind.

Q.How many vacancies are there in SSC CGL 2021?

Q.Is there any negative marking in SSC CGL?

Q.How many shifts are there in SSC CGL Tier-2?

Ans: As per the notification, the tier II exam is conducted in two shifts.

Ans: Paper one and paper two are compulsory for all posts.