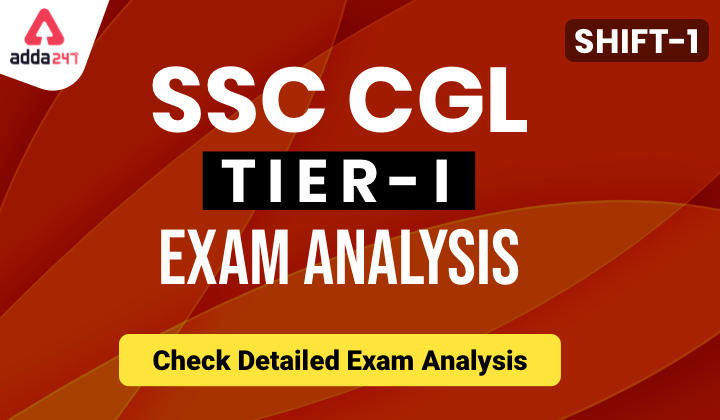 SSC CGL Exam Analysis Shift 1: The Staff Selection Commission has scheduled the SSC CGL TIER I exam from 13th August 2021 to 24th August 2021. The exam will be conducted in 3 shifts. Candidates who have appeared for the exam must be waiting for the analysis. We are providing you all with the analysis of all the three shifts’ all-day exams. This analysis will help the candidates to get an idea about the pattern of questions being asked in the exam. The level of examination and questions also.

The exam review obtained from students shows that the level of the SSC CGL Tier 1 2021 exam has been provided in the below table. The quantitative aptitude section was lengthy and calculative. A total of 100 questions were attempted in 60 minutes.

This section is important from the scoring perspective. The candidates who prepare for this to score more can get the advantage of scoring more in less time. The questions may be based on static or current affairs. Let us check the questions asked in the 1st shift of 20th August 2021.

Most of the questions were asked from the Current Affairs of January 2021.

The quantitative Aptitude section is generally lengthy comprising questions from arithmetic and advance maths. The level of this section in the exam was easy to moderate. The topic-wise distribution of questions has been provided below. This is a very unpredictable section it depends on the candidate’s preparation to get good attempts in the quant section.

This section contains 25 questions for 50 marks. This is the very scoring topic of the examination. Let us check the detailed  SSC CGL Exam Analysis for shift 1:

This will be updated soon…

Q. What was the level of the overall SSC CGL 20th August shift 1 examination?

Ans: The overall level of the examination was easy to moderate.

Q. What are the good attempts of the SSC CGL 20th August Shift 1 exam?

Q. How many sections are there in SSC CGL TIER I exam?