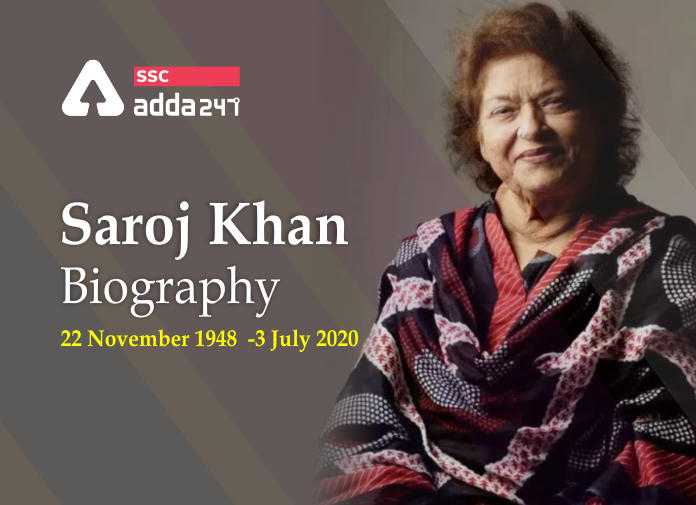 She was born on 22 November 1948 as Nirmala Nagpal. She started her career as a child artist at the age of three with the film Nazarana as child Shyama and a background dancer in the late 1950s. She married film choreographer B Sohanlal in 1962 at the age of 13 while he was 41, already a married man with four children. At the age of 14, Saroj had her first child with Sohanlal. She separated from Sohanlal in 1965 but continued working as his assistant. Later on, she married Sardar Roshan Khan and gave birth to a daughter Sukaina Khan, who now runs a dance institute in Dubai.

What Are The Largest States In India? Check Complete List

Saroj Khan’s first break as an independent choreographer came in 1974 with “Geeta Mera Naam”. After Geeta Mera Naam, she would have to wait for the next 13 years before her first breakthrough song, Mr India’s Hawa Hawai in 1987, would appear on the horizon. Saroj Khan announced her arrival with this blockbuster and iconic song. After this, she never looked back and made her place in Bollywood in the list of most successful choreographers of all time. Saroj Khan also tried her hands at screenwriting and turned writer for movies like Khiladi, Hum Hain Bemisaal, Veeru Dada, Chhote Sarkar, Dil Tera Diwana, Hote Hote Pyar Ho Gaya, Benaam and Khanjar.

Some of the films in which Saroj khan had done choreography:

Saroj Khan holds the record of winning most no. of Filmfare awards for best choreographer with 8 wins.

What is Thunderstorm? Causes, Types, And Safety Precautions