Q5. In the following question, a word has been given, followed by four other words, one of which cannot be formed by using the letters.
MIRACULOUS
(a) MOLAR
(b) LOCUS
(c) SCAR
(d) SOLACE

Q8. Three out of four are similar in some way, find out the one which is different from others.
(a) Brook
(b) Pond
(c) Pool
(d) Tank

Q9. Pointing to a man in a photograph, a woman said, “His brother’s father is the only son of my grandfather.” How is the woman related to the man in the photograph?
(a) Mother
(b) Aunt
(c) Sister
(d) Grand mother

Q10. Find the missing number in the following matrix.

S1. Ans.(b)
Sol. In this alternating repetition series, the random number 21 is interpolated every other number into an otherwise simple addition series that increase by 2, beginning with the number 9.

S7. Ans. (d)
Sol.
Suresh starts from A. His afterward movements are shown in the diagram made according to the instructions. His final position is F. Now F lies to the east of A. He is at a distance AF which is (30 + 15) i.e. 45 m. 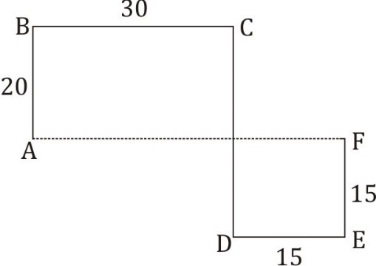 S8. Ans. (a)
Sol. Brook is a natural stream of fresh water where as others may be artificially formed.