RRB NTPC And RRC Group D Exams: The major railway recruitments that aspirants are looking for this year are RRB NTPC and RRC Group D. RRB NTPC exam will be conducted for the recruitment in Non-Technical Popular Categories of railways whereas the RRC Group D is for the Group D posts. Approx 2.4 crore overall applications for both recruitments were received for a total of 1.38 lakh vacancies. The RRB NTPC notification was released one year ago and candidates who applied for the recruitment are in a dilemma with the postponement of RRB NTPC & RRC Group D exams. With no official confirmation by the RRB on the exam date, it has become a matter of debate among aspirants. Aspirants are contemplating the possible exam date to make sure they can strategize their preparations accordingly. More than 2 crore individuals are bidding their time to get recruited under the Ministry of Railways.

In September 2019, an official notice was released by the Board stating that it is looking for the exam conducting agency to conduct examinations for such a huge crowd. Till date, no response has been provided by the official authorities regarding the same. Students waiting for the exam are becoming restless with the continuous delay by the RRB. All that left for the aspirants are hope and wait who come up with a simple question- How much more wait? 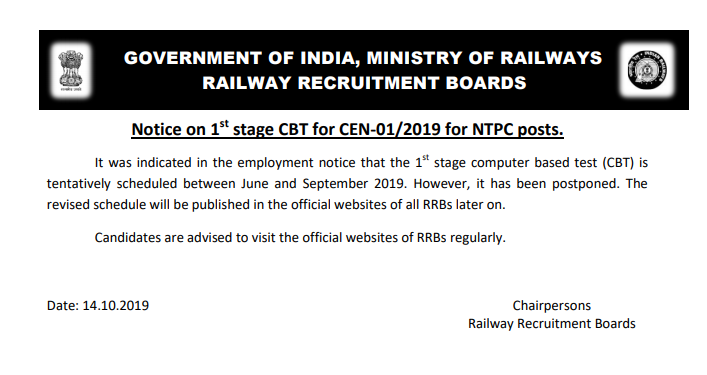 A total of 35,208 vacancies for RRB NTPC were released for all regions. Check out the region-wise vacancies notified by the RRB.

A total of 1,03,769 vacancies for RRC Group D were notified by the board. Check out the region-wise distribution of vacancies: