Railways have officially announced that exams like RRB NTPC, RRC Group D, and RRB Ministerial And Isolated Categories will be conducted from 15th December onwards. The application status link was activated from 21st to 30th Sep 2020. RRB NTPC Admit card 2020 Date is expected to be released in the first or second week of December 2020. Recently, the Railway board announced the official statement regarding the Computer Based Test (CBT) for the RRB NTPC exam. It says that ‘Indian Railways is going to start computer-based tests for notified vacancies from 15th December 2020’. The admit card for RRB NTPC is expected to be released 4-days before the exam, as it always does, and the link will be updated here as well to directly download the RRB Call letter.

Soon after the RRB NTPC exam date, RRB also activated the link of RRB NTPC Application Status on 21st September 2020. Only those candidates whose application is accepted can download the admit card.

The RRB NTPC examination is conducted to recruit eligible aspirants to undergraduate & graduate posts in the railways. RRB NTPC Admit card is an essential document that candidates must carry to the examination hall. The RRB NTPC exam date will be officially announced on the website. You will get the direct link to download the admit card in this post.

RRB Ajmer has earlier released corrigendum 6 to inform all the interested agencies that the pre-bid is going to held on the scheduled time. Approx 1,26,30,885 applicants will appear for the RRB NTPC CBT 1 for 35,208 vacancies for Non-Technical Popular Categories (NTPC)

The RRB NTPC exam is the most awaited exam of the year as crores of applications are looking forward to getting recruited in the railways. As per the official notice released by the RRB, the railway will decide the exam conducting agency that will conduct the exams for crores of students. The Admit Card will be available after the finalization of the recruiting body. 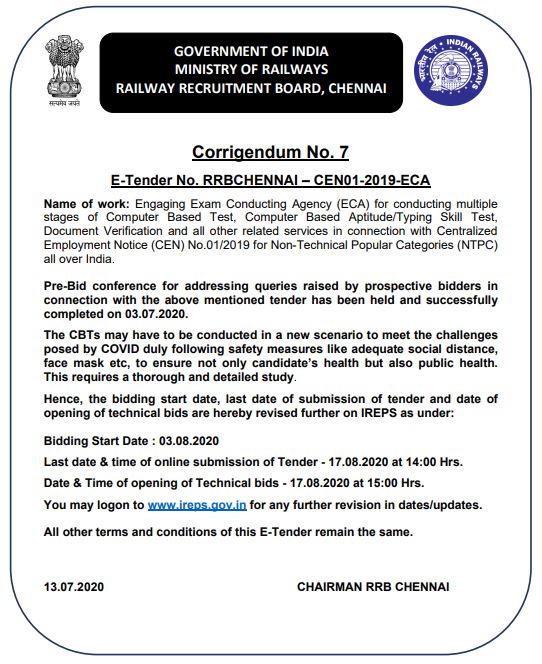 What are the Important Dates for RRB NTPC Admit Card?

What is the RRB NTPC admit card expected release date? Railway officials are planning to release the dates in the coming months. RRB NTPC Exam 2020 for CBT 1 is expected to be conducted from 15th of december 2020. The railways are in the process of finalizing an ECA who will be responsible for all the exam activities. Before the exam, you must be aware of all the important dates for the RRB NTPC 2020 exam. Take a look at the important exam dates that you must know:

The RRB NTPC exam will be conducted in 15 official languages as announced by the Ministry of Railways. The RRB NTPC Hall ticket 2020 for the 21 regions of railways have been provided below. You can visit the official website for official confirmation of RRB NTPC admit card.

RRB NTPC Exam To Be Conducted in 15 Languages

When the admit card is released, it is mandatory to know about the steps to download. You must visit the official website as per your region. The region you applied for at the time of application will be counted. Knowing the region will ease the procedure to download RRB NTPC Admit card. Check out the steps:

What are the detailed mentioned on the RRB NTPC Admit Card 2020?

The details and information published on the admit card for RRB NTPC 2020 Exam are as follows:

Documents to carry for exam with RRB NTPC Hall Ticket

What are the documents you need to carry to the examination hall? Moreover, without the required documents, your candidature might not be considered. Take note of all the important documents mentioned below before appearing for the RRB NTPC exam 2020:

The selection procedure for RRB NTPC railway includes 3 stages. Stage 1 is followed by stage 2, then typing test and document verification.

CBAT and typing test will be qualifying in nature. CBAT will be conducted only for the candidates who have opted for Traffic Assistant and Station Master.

Based on the combined performances of all the stages, candidates will be called for the Document Verification round.

How to prepare for the RRB NTPC Exam?

To prepare for the RRB NTPC railway Exam, you must study from the best study material. A proper study plan will definitely help you in maintaining consistency. Thorough preparation for the exam can be done by practising quizzes on a daily basis. You can get free study plan for RRB NTPC railway on Adda247. Start attempting the mock tests online and make sure to go through the previous years papers.