RRB JE Stage II exam is scheduled to be conducted from 28th August to 1st September2019. The overall merit for the selection will be made on the basis of the marks scored in stage II, so candidates need to prepare thoroughly for the second stage. To help the aspirants, Adda247 has come up with a study plan in which we will provide you daily quizzes of all technical subjects. The below quiz will be helpful for the candidates who opted the exam group Computer Science & IT in RRB JE stage II.

Q1. In which of the following addressing mode, the operand is specified in the instruction itself?
(a)Sequential
(b)Direct
(c)Immediate
(d)Relative

S1. Ans.(c)
Sol. In immediate addressing the operand is specified in the instruction itself. In this mode the data is 8 bits or 16 bits long and data is the part of instruction.

Q2. Collection of information stored in database at particular instance of time is called as ____________
(a) Instance of Database
(b) Database cardinality
(c) Database tuple
(d) Database Schema

S2. Ans.(a)
Sol. A database instance is a set of memory structures that manage database files. A database is a set of physical files on disk created by the CREATE DATABASE statement. The instance manages its associated data and serves the users of the database. The data stored in database at a particular moment of time is called instance of database.

S3. Ans.(d)
Sol. Exclusive OR function can be represented in terms of OR and AND gates.
Boolean expression A¯B + ¯AB (2 AND gates & 1 OR gate) can be replaced by a single exclusive OR gate. 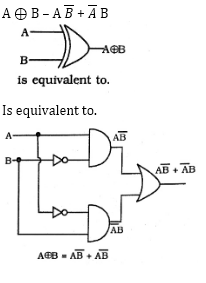 S4. Ans.(b)
Sol. The 8086 has complete 16 bit architecture–16bit internal registers, 16-bit data bus and 20-bit address bus (1MB of physical memory). Because the processor has 16 bit index registers and memory pointers, it can effectively address only 64 kb of memory.

S5. Ans.(d)
Sol. There is a restriction while using modulus (%) operator in C languages. Numerical data can be following 3 types –in–tigers, floats and double. Modulus operator can operate only on integers and can’t operate on floats & double. If anyone tries to use it on float then the compiler would display an error message as “Illegal use of Floating Point”,

S6. Ans.(a)
Sol. IEEE 802.3 is otherwise known as the Ethernet standard and defines the physical layer and the media access control (MAC) of the data link layer for wired Ethernet networks, generally as a local area network (LAN) technology.

Q8. When a user deletes a file, empties the recycle bin, what happens to the file?
(a) Sector of hard Drive are blanked/erased
(b) Clusters are flushed
(c) The file is moved to C:/windows/temp
(d) Associated entries in the FAT (File Allocation Table) are removed

S8. Ans.(d)
Sol. When a user delete a file and empties the recycle bin, then file is never deleted from a hard drive, it is just removed from the file allocation table. It still sits there on the hard drive, but the OS is not longer able to see it/locate it.

Q9. The keyword struct and class differ in c++ context-
(a) struct is used in C where as class in used in C++
(b) Struct can not have member functions where as a class can have
(c) Struct has default public, class has default private
(d) All of the above

Q10. Which of the following circuit type is based upon time or clock pulse?
(a) Combinational circuit
(b) Sequential circuit
(c) Full adder
(d) All of the above