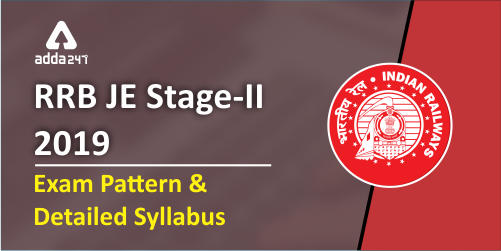 A total of 13,487 Vacancies were released in RRB JE for recruitment to various of Junior Engineer, CMA etc that is a great opportunity for aspirants to grab a seat in the railways. There are various departments for which aspirants applied according to  their desired qualifications and preference. Many aspirants are in a dilemma about the syllabus and exam pattern dealing with different branches. We are here to resolve your queries and make it easy for you to understand what you need to do in RRB JE Stage II.

The RRB JE Stage 1 exam was held from 22nd May 2019 till 2nd June 2019 and the answer key for the same has already released on 11th July 2019. The Result can also be out anytime soon and candidates sure of their success should start preparing for the next important stage i.e. RRB JE Stage II. The second stage contributes

RRB JE second stage consists of four common subjects namely General Awareness, Physics & Chemistry, Basics of Computers and Applications, Basics of Environment and Pollution Control, and one subject namely Technical Abilities that will be according to the stream you choose while applying for RRB JE. Let’s take a look at the detailed subject wise syllabus for RRB JE Stage II.

Up to 10th standard CBSE syllabus.

Technical Abilities: The relevant trades & exam Group for various engineering discipline of RRB JE Stage II Examination are given below. Click on the exam group to check the detailed syllabus of that exam group.