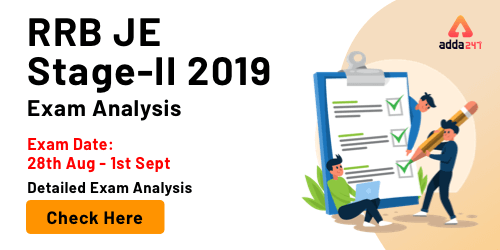 RRB JE CBT II Exam Analysis: RRB JE CBT II exam 2019 has finally commenced from 28th August and its time to gain a reputed job in the railways and work as a Junior Engineer. A proper analysis of the exam can play a vital role in appearing for the upcoming shifts. Here we are with the complete RRB JE CBT II Exam Analysis where we will be providing the topic wise questions asked, the review of candidates and what can you expect in the upcoming shifts. The complete section-wise review of the exam conducted on 30th August is given in this post. Scroll down and read more.

The difficulty level of the exam was of moderate level as per the students.  The RRB JE Stage II Exam consists of 5 sections where the highest scoring one is the technical abilities subject contributing a total of 100 marks. Let’s take a look at the complete exam pattern :

The General Awareness section includes questions from current affairs, and static gk mainly. Some questions from history, polity were also seen. Here are some of the questions asked from this section:

The Physics & Chemistry questions asked in the exam were of 10th Standard. Basic questions of physics and chemistry were asked. Here are some questions from this section:

The questions from computers belonged to the topics such as The architecture of Computers, Input and Output devices, Storage devices, Networking, Operating System like Windows Unix & Linux, MS Office Internet and Email, Websites & Web Browsers etc.

This section consisted of the Basics of Environment; Adverse effect of environmental pollution and control strategies for various types of pollution, their effect and control. Questions were related to:

The RRB JE CBT II exam is dominated by the technical abilities subject chosen by the candidate. This section was moderate in level. The candidates whose concepts are clear can easily attempt the questions. Here we are providing the questions asked in the  Mechanical exam group as per the review by the students: