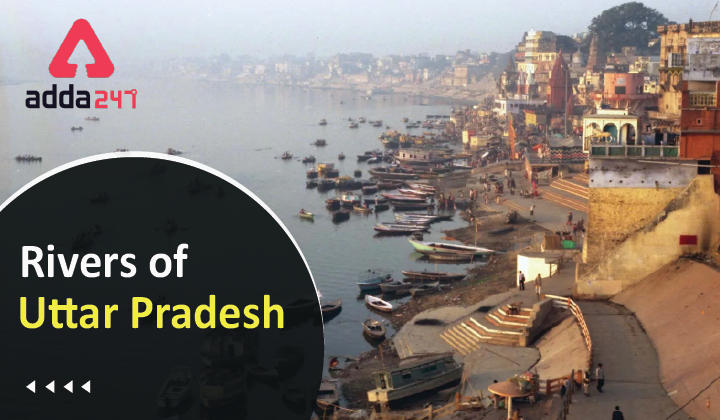 Major source of surface water in the state are rivers flowing from southeast to southwest direction. Major rivers include Ganges, Yamuna, Ghagra, Gomti, Gandak, Sone and Sarda. The Ganges being too large to be tamed, no major irrigation projects have been created on its mainstream. The irrigation needs are being met by canal projects constructed early this century. In recent years, some of the northern and southern tributaries of Ganges and their minor feeder streams have been tamed, creating a few reservoirs.

Some of the most Important Rivers of Uttar Pradesh are as follows:

The Bhagirathi river originates from Gomukh, terminus of Gangotri Glacier. It is joined by the Alaknanda River in Devprayag and officially becomes the Ganga. At Haridwar, the Ganga comes out from mountains onto plain.The 2525 km long river, the Ganga flows south and east through the Gangetic plain  of North India and empties out into the Bay of Bengal.

Tributaries of the Ganga River

Famous Cities on the Banks of the River Ganga

The Yamuna is the largest tributary of the Ganga which rises on the slopes of Banderpunch peaks in the great Himalayas near Yamnotri in western Uttarakhand. It travels a total length of 1376 km. it merges with the Ganga at Triveni Sangam, Prayagraj.

The Chambal- Tributaries of the Chambal river are as follows

Famous Cities on the banks of River Yamuna

Ghaghara, also called Karnali originates on Tibetan Plateau near lake Mansarovar. With a length of 507 Km, the Ghaghara river is a major left tributary of the Ganga. Ghaghara enters in India at Kotia Ghat near Royal Bardia National Park, Nepal Ganj, where it is known as the river Girwa for about 25km. Lower Ghaghara is also known as Sarayu river and finds mention in Ramayana. Ayodhya is situated on its right bank. The Ghaghara was also the site of the battle between Amin Khan Aitigin and Tughral Tughan Khan.

The Gomati River is a tributary of the Ganga River. It originates from Gomat taal, near madho tanda, Pilibhit, India. The length of the Gomati is 960 km which flows through the Uttar Pradesh and meet the Ganga near saidpur of Gazipur district.

The cities which are beside the Gomati are Lucknow, Neemsarm, Jaunpur, Zafrabad, Lakhimpur Kheri, Misrikh etc.

The Betwa river is being linked to the Ken river as the part of the river linking project in Madhya Pradesh.The Indian Navy named one of its frigates INS Betwa in honour of the river.

Tributaries of the Betwa– Bina, Dhasaan

Some of the major cities beside betwa river are Vidisha,  Sanchi, Orchha, Hamirpur

THE TAMSA OR TONS RIVER

The Tamsa river also called the Tons river is a tributary of the Ganga and flows in the state of Uttar Pradesh and Madhya Pradesh. The Tamsa rises in a tank at Tamakund in the Kaimur Range with the length of 264 Km. it joins the Ganga at Sirsa.Tamsa river makes a vertical fall of 70m Known as Purwa Falls.Other waterfalls are Chachai falls, Keoti Falls, Odda Falls are made by the Tamsa.