Q4. If a mirror is placed on the line MN, then which of the answer figures is the right image of the given figure? 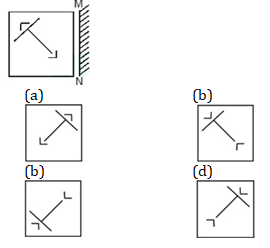 Q5. A piece of paper is folded and punched as shown below in the question figures. From the given answer figures, indicate how it will appear when opened. 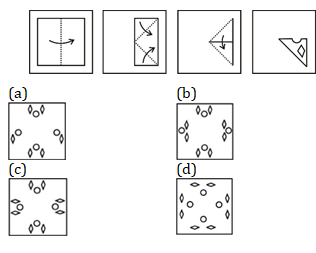 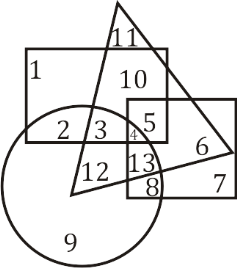 Directions(Q8-Q9) Two statements are given followed by two/four conclusions I, II, III and IV. You have to consider the statements to be true even if they seem to be at variance from commonly known facts. You have to decide which of the given conclusions, if any, follow from the given statements.
Q8. Statements: All students in my class are bright. Manish is not bright.
Conclusions
I. Some students are not bright.
II. Manish must work hard.
III. Non-bright ones are not students.
IV. Manish is not a student of my class.
(a) Only I
(b) II and III
(c) III and IV
(d) Only IV

S7. Ans. (a)
Sol. The required region should be common to the circle and square but outside the triangle and rectangle. Such region is marked ‘8’.

S8. Ans. (d)
Sol.
By the statement we can conclude that Manish is not a student of my class.

S9. Ans. (c);
Sol. Statement I, II do not tell anything about Male Politicians or voting of some politicians.
.