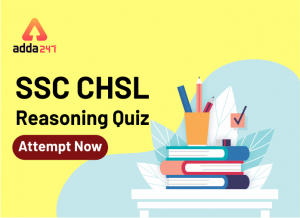 Q2. In the following question, select the missing number from the given series.

Q3. A series is given, with one word missing. Choose the correct alternative from the given ones that will complete the series.
yes, rain, alive, subtle, ?
(a) airport
(b) smoke
(c) inch
(d) fabulous

Q4. From the given words, select the word which cannot be formed using the letters of the given word.
SHORTING
(a) THORN
(b) NITRO
(c) NOISE
(d) STING

Q6. How many squares are there in the given figure?

Direction (18): Which answer figure will complete the pattern in the question figure?

Q10. Introducing a boy, a girl says, “He is the son of the sister of my mother’s brother.” How is the boy related to the girl?
(a) Cousin
(b) Brother-in-law
(c) Father-in-law
(d) Niece

SSC Full Form: What does SSC Stand for and How does it work?

SSC JE Cut Off Out: Check SSC JE Paper I And...