Skip to content
For the first time SSC 2016 examination will be held in Computer Based pattern and managing time will be one of the important factor while solving the questions. So in order to make students familiar with such a situations we are providing questions in a time based manner , which will help students to manage the time properly.

1. In a certain code, CONVENTIONAL is written as NOCNEVOITLAN. How is ENTHRONEMENT written in the code?

TNEROHEMNTNE
TNEROHEMNNTE
TNEORHMENTNE
NTEROHEMNNTE
Solution:
The word is divided into groups of three letters each and then the letters of each group are
written in a reverse order

2. In a certain code language, COMPUTRONE is written as PMOCTUENOR. How is ADVANTAGES written in the code?

SEGATNAVAD
AVDATNSEGA
AVDATASEGN
NAVDASEGAT
Solution:
The first four letters, the middle two letters and the last four letters of the words are written in
a reverse order to form the code.

3. In a certain code, VISHWANATHAN is written as NAAWTHHSANIV. How is KARUNAKARANA written in that code?

4. In a certain code, MONKEY is written as XDJMNL. How is TIGER written in that code?

QDFHS
SDFHS
SHFDQ
UJHFS
Solution:
The letters of the word are written in a reverse order and then each letter is moved one step
backward to obtain in code.

5. In a certain code, PLEADING is written as FMHCQMFB. How is SHQULDER written in that code?

6. What is the product of all the numbers in the dial of a telephone?

7. At the end of a business conference the ten people present all shake hands with each other once. How many handshakes will there be altogether?

8. The number of boys in a class is three times the number of girls. Which one of the following numbers cannot represent the total number of children in the class? 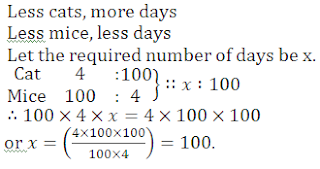 12. In a family, each daughter has the same number of brothers as she has sisters and each son has twice as many sisters as he has brothers. How many sons are there in the family?

13. Five bells begin to all together and toll respectively at intervals of 6, 5, 7, 10 and 12 seconds. How many times will they toll together in one hour excluding the one at the start?

14. There are deer and peacocks in a zoo. By counting heads they are 80. The number of their legs is 200. How many peacocks are there?