Directions (7-11): To answer these questions, study the following diagram carefully: 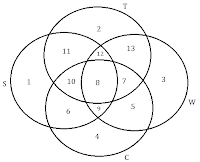 
Q9. Students having General knowledge but not having English are indicated by which region?
(a) region 3
(b) union of regions 6, 10 and 4
(c) region 13
(d) None of these


Q12. Number of letters skipped in between adjacent letters in the series is in the order of 2, 5, 7, 10. Which one of the following letter groups obey this rule?
(a) QTZHS
(b) FNKOT
(c) CEGLT
(d) SYBEP


Q13. In the following series, the number of letters skipped in between the adjacent letters are in ascending order, i.e., 1, 2, 3, 4. Which one of the following letter groups does not obey this rule?
(a) CEHLQ
(b) HJMPT
(c) GILPU
(d) DFIMR

Finally, in the code so obtained, the last letter of the word is inserted at the end.
Same pattern follow by LACK -> KBBLK
So, GRID -> FSHED


S3. Ans.(b)
Sol. Clearly, each letter is coded by a numeral which is 2 less than the numeral denoting the position of the letter in the English alphabet. The code for the word is obtained by joining together physically the number codes for the individual letters.
C,O,L are 3th, 15th and 12th letters respectively. So, their codes are 1, 13 and 10 respectively.
Thus, the code for COOL becomes 1131310.