Here we are providing a Reasoning quiz in accordance with the syllabus of SSC CGL /MTS / CPO Tier-I, This post comprises 15 Questions of Miscellaneous Questions which will really help you get more marks in the final exam.

Q1. If in the word ECCEDENTESIAST, the first letter is interchanged with the last letter, the second letter is interchanged with the thirteenth letter and so on, which letter would come after “D” in the newly formed word?
(a) E
(b) N
(c) T
(d) C
Ans.(a)
Sol.  By reversing the letters, the new letter sequence is TSAISETNEDECCE. Clearly, E comes after D.

Q2. Choose the missing character from the given alternatives. 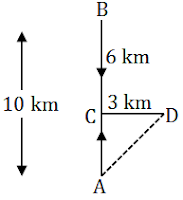 
Q8. In this question, certain pairs of words are given, out of which the words in all pairs except one, bear a certain common relationship. Choose the pair in which the words are differently related.
(a) Mercury : Sun
(b) Moon : Earth
(c) Star : Galaxy
(d) Wheel : Axle
Ans.(c)
Sol. In all other pairs, first moves about the second.


Q9. Choose the word which is least like the other words in the group.
(a) Bake
(b) Peel
(c) Boil
(d) Roast
Ans.(b)
Sol. Here, all except Peel are different forms of cooking. Hence, the answer is (b).

Directions (12-13): In each of the following letter series, some of the letters are missing which are given in that order as one of the alternatives below it. Choose the correct alternative.
Q12. aa _ abbb _ ccccd _ ddccc _ bb _ ba
(a) abcda
(b) abdbc
(c) abdcb
(d) abcad
Ans.(c)
Sol. The series is aaaa/bbbb/cccc/dddd/cccc/bbbb/a.