Q3. Find the value of X in the following figure: 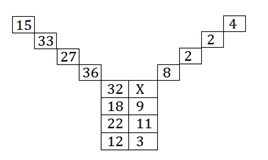 Q5. In this question, a set of figure carrying certain characters is given. Assuming that the characters in each set follow a similar pattern, find the missing character?

Q8. From the given alternative words, select the word which cannot be formed using the letters of the given word: MEASUREMENT
(a) TEAMS
(b) MASTER
(c) SUMMIT
(d) SUMMER

Directions (9-10): Read the following information carefully and answer the questions given below:
Seven executives P, Q, R, S, T, U and W reach office in a particular sequence. U reaches immediately before P but does not immediately follow S. R is the last one to reach office. T follows immediately after P and is subsequently followed by W.

Q11. In a certain code language the word EXAMPLES is written as SELPMAXE. How will the word BUOYANCY be written in that language?
(a) YBANCYOU
(b) CUOYYBAN
(c) CUYOYBAN
(d) YCNAYOUB

Since SSC MTS Exam will begin on 30th April, You all need to understand the exam pattern and trick, approach to crack MTS exam,