Q3. How many pairs of letters are there in the word ANSWER which have as many letters between them as they have in alphabetical order?
(a) One
(b) Two
(c) Four
(d) None


Q5. Find the missing number in the below matrix?


Q7.Rakesh pointed towards the photo of his son and said to Kamla, ‘His mother is the daughter of your mother.’ Find out how is Kamla related to Rakesh?
(a) Sister
(b) Maternal aunt
(c) Sister-in-law
(d) Daughter


Q9. From the given alternative words, select the word which cannot be formed using the letters of the given word:
ENGINEERING
(a) GINGER
(b) ENGINE
(c) NEARER
(d) RING

Q11. A direction pole was situated on the crossing. Due to an accident the pole turned in such a manner that the pointer which was showing East, started showing South. One travelerwent to the wrong direction thinking it to be West. In what direction actually he was travelling?
(a) North
(b) South
(c) East
(d) West


Q15. Find the missing number in the below matrix? 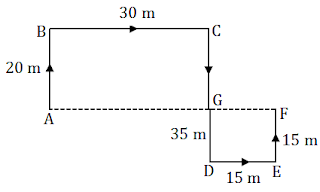 The movements of Sanjeev from A to F are as shown in figure. 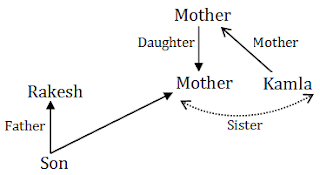 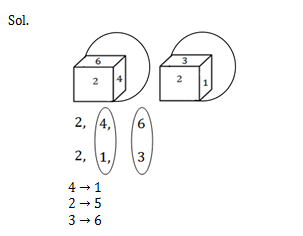