Directions(5): In every question below a statement has been given followed by two assumptions shown as I and II. You have decide which assumption exists in the statement and answer accordingly.

Q10. Find the missing number in the following image? 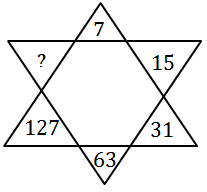 DIRECTIONS (11-13): The questions below are to be answered on the basis of the three views of a cube given as follows :

Q14. Six friends are playing cards in a circular enclosure facing the centre. Shubhash is on the right of Pramod. There is one person in between Umesh and Suresh. Praveen is in between Shubhash and Umesh and Praveen is second to the left of Alok. If Alok and Shubhash mutually change their places, then who will be second to the right of Praveen?
(a) Suresh
(b) Umesh
(c) Shubhash
(d) Pramod