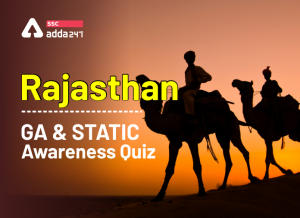 Q3. In which district ‘Bharthari Fair’ is celebrated?
(a) Karauli
(b) Baran
(c) Alwar
(d) Jhunjhunu

Q4. Where the Sahiba lift irrigation project is situated?
(a) Sri Ganganagar
(b) Hanumangarh and Churu
(c) Jodhpur
(d) Pali

Q6. At which season Barley is produced in the Rajasthan state?
(a) In kharif season
(b) In rabi season
(c) In both season
(d) In rainy season

Q8. Which is the longest river, flowing only in Rajasthan?
(a) Mahi
(b) Banas
(c) Chambal
(d) Luni

S1. Ans.(b)
Sol. The Saharias are mainly found in the districts of Morena, Sheopur, and Guna districts of Madhya Pradesh and Baran district of Rajasthan.

S3. Ans.(c)
Sol. Bhratahari is famous in Alwar of Rajasthan. Astami is the worship day celebrate as a festival. The fair of bhratahari grouped by lakhs of peoples of Alwar, Jaipur, Dausa near Sariska in Alwar.

S5. Ans.(a)
Sol. Bisalpur Dam is a gravity dam on the Banas River near Deoli in Tonk district, Rajasthan, India. The dam was completed in 1999 for the purpose of irrigation and water supply.

S6. Ans.(b)
Sol. Barley crop can be grown in Rabi season. The normal sowing season extends from middle of October to middle of November. At elevations of about 2300meters the barley can be grown as irrigated crop with sowing time from end of March to end of May.

S7. Ans.(c)
Sol. As per Forest Survey of India, State of Forest report 2017, Rajasthan has recorded forest area of about 32,737 square kms. This forest area forms 9.57% of state’s geographical area and about 4.28% of India’s forest area.

S8. Ans.(b)
Sol. River Banas originates in the Khamnor hills of the Aravali range (about 5 km from Kumbhalgarh) and flows along its entire length through Rajasthan. Banas is a major tributary of the River Chambal, the two rivers meeting near village Rameshwar in Khandar Block in Sawai Madhopur District.