Q4. In this letter series some of the letters are missing which are given in that order as one of the alternatives below it. Choose the correct alternative.
a _ cd _ ab _ c _ dd _ aabb _ cccd _ d
(a) bdbdaac
(b) bddcabd
(c) babcabd
(d) bbdacdc
Ans.(c)
Sol.  The series is abcd/aabbccdd/aaabbbcccddd.
Thus, each letter of first sequence is repeated two times in the second sequence and three times in the third sequence.
Q5. If JOSEPH is coded as FKOALD, then GEORGE will be coded as_____
(a) CADMNO
(b) CAKNIT
(c) CAKNCA
(d) JAKINS
Ans.(c)
Sol.  Each letter of the word is moved four steps backward to obtain the code.

Q7. These three figures are followed by four answer figures from which you have to choose a figure which would most closely resemble the unfolded form of figure.

Q8. Find the number of triangle in this figure?

Q12. Swati starts from a point walks 2 km towards North, turns towards her right and walks 2 km, turns right again and walks. In which direction is she going now?
(a) North
(b) South-East
(c) South
(d) West 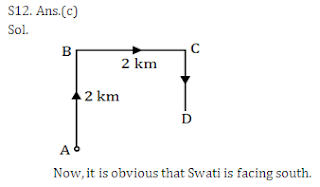 Q15. In this question, various terms of a letter series are given with one term missing as shown by (?). Choose the missing term out of the given alternatives.
b e d f ? h j ? l
(a) i m
(b) i o
(c) i n
(d) j m
Ans.(b)
Sol.  The series may be divided into groups as shown:
bed/fih/jol .
In each group, first letter is moved two steps forward to obtain the third letter while the third letter is moved one step forward to obtain the second letter.