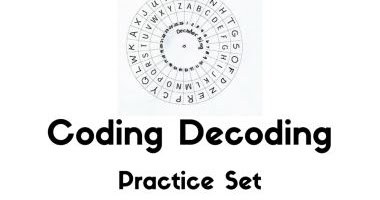 Q1. In a certain code language, ORIENTAL is written as PPLASNHD. How is SACRIFICE written in that code language?
(a) TYCNNXPN
(b) TXCNNXPN
(c) TYCMNXPN
(d) None of these 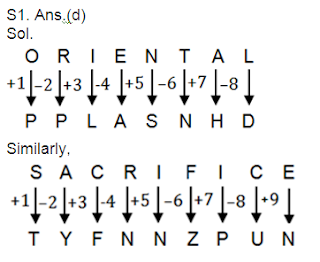 Q2.In a certain code, the words COME AT ONCE were written as XLNVZGLMXV. In the same code, which of the following would code OK?
(a) KL
(b) LM
(c) KM
(d) LP
Ans.(d)
Sol. Each letter in the word is replaced by the letter which occupies the same position from the other end of the alphabet, to obtain the code.

Q3. In a certain code, REFRIGERATOR is coded as GIRFERROTAREG. Which word would be coded as TELEVISION?
(a) VELFTNOISI
(b) VFLETNOISI
(c) VELETNOISI
(d) VELETNPISI 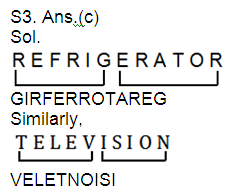 Q4. If LBAEHC is the code for BLEACH, then which of the following is coded as NBOLZKMH?
(a) OBNKZLHM
(b) LOBNHMKZ
(c) OCPMALNI
(d) BNLOKZHM
Ans.(d)
Sol. The word is divided into groups of two letters each and the letters in each pair are reversed.

Directions: The hundred cells in the square below have been filled with letters. The columns and the rows are identified by the number 0 to 9. A letter in a cell is represented first by its column number and then by its row number e.g., G in column 3 and row 1 is represented by 31. In each of the following questions, a word has been given which is represented by one of the four alternatives given under it. Find the correct alternative. 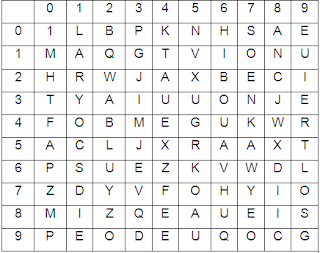