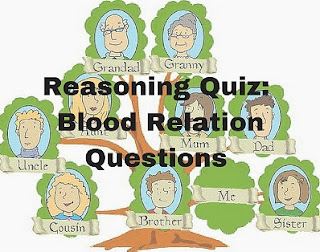 Q1. Pointing towards a person in the photograph, Swati said, “He is the only son of the father of my sister’s brother.” How is that person related to Swati?
(a) Mother
(b) Father
(c) Maternal uncle
(d) None of these
Ans.(d)
Sol. The relations may be analysed as follows:
Sister’s brother – Brother; Brother’s father – Father; Father’s son – Brother
So, the person in the photograph is Swati’s brother. Hence, the answer is (d).

Q3. Pointing out to a lady, Rajesh said, “She is the daughter of the woman who is the mother of the husband of my mother,” Who is the lady to Rajesh?
(a) Aunt
(b) Grand daughter
(c) Daughter
(d) Sister
Ans.(a)
Sol. The relations may be analysed as follows:
Mother’s husband – Father’s; Father’s mother – Grandmother; Grandmother’s daughter – Father’s sister; Father’s sister – Aunt
So, the lady is Rajesh’s Aunt.
Hence, the answer is (a).

Q5. Showing the man receiving the prize, Pooja said, “He is the brother of my uncle’s daughter.” Who is the man to Pooja?
(a) Son
(b) Brother-in-law
(c) Nephew
(d) Cousin
Ans.(d)
Sol. Brother of uncle’s daughter – Uncle’s son – Cousin.
So, the man is Pooja’s cousin.

Q9. Sneha is the niece of Ashish. Ashish’s mother is Priya. Kamla is Priya’s mother. Kamla’s husband is Hari. Krishna is the mother-in-law of Hari. How is Sneha related to Hari?
(a) Daughter
(b) Great grand daughter
(c) Grand niece
(d) Great grandson’s daughter
Ans.(b)
Sol. Sneha is the niece of Ashish means Ashish is the uncle of Sneha. Now, Priya is Ashish’s mother. So, Priya is the grandmother of Sneha. Hari is Priya’s father. So, Sneha is the great grand-daughter of Hari.