Q1. Select the missing number from the given responses: 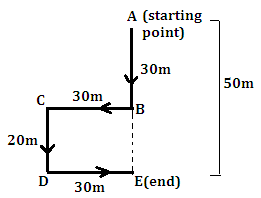 Q3. You have to consider the statement to be true, even if it seems to be at variance from commonly known facts. You have to decide which of the given conclusions I, II, III & IV , if any, follow from the given statements.
Statements:
1. All teachers are actors.
2. Some actors are women.
Conclusion:
I. All teachers are women.
II. Some women are teachers.
III. Some women are actors.
IV. All actors are teachers.
(a) Only Conclusion I follows
(b) Only Conclusion II & IV follows
(c) Only Conclusion III follows
(d) None of the conclusions follows.
Ans.(c)
Sol.

From the venn diagram we infer that only Conclusion III follows.

Q4.How many triangles are there in the following figure PQRS?

Q6. Which of the following alternative is correct, if Number of letters skipped in between adjacent letters in the series decreases by one each time?
(a) BHNSV
(b) IMTXB
(c) MSYBG
(d) TZEIL
Ans.(d)
Sol.

Directions (7-8): Arrange the given words in alphabetical order and choose the one that comes first.

Q12. A girl introduced a boy as the son of the daughter of the father of her uncle. The boy is girl’s
(a) Brother
(b) Son
(c) Uncle
(d) Son-in-law
Ans.(a)
Sol. Daughter of uncle’s father – Uncle’s sister – Mother; Mother’s son – Brother.

Q13. Pointing to a man in a photograph, a woman said, “His brother’s father is the only son of my grandfather.” How is the woman related to the man in the photograph?
(a) Mother
(b) Aunt
(c) Sister
(d) Daughter
Ans.(c)
Sol. Only son of woman’s grandfather – Woman’s father; Man’s brother‘s father – Man’s father.
So, the woman is man’s sister.