Q1. From the given alternative words, select the word which cannot be formed using the letters of the given word:
ENGINEERING
(a) GINGER
(b) ENGINE
(c) NEARER
(d) RING
Ans.(c)
Sol. NEARER
Because ENGINEERING does not contain letter ‘A’.
Q2.If in a specific code, SHORE is coded as QFMPC, then in the same code, what would be coded as ZCYAF?
(a) BEACJ
(b) BEACH
(c) DGCEJ
(d) DGAEJ 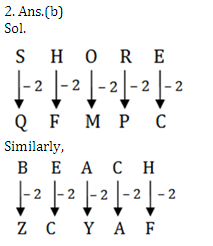 Q3. Find analogous pair of Mad : Insane?
(a)  Red : Green
(b)  Healthy : Fat
(c)  Brave : Timid
(d)  Slim : Thin
Ans. (d)(Explanation: First is more intense form of second.)
Q4. There are five rows in a class in which five children are sitting behind each other in five different rows in the following manner:
A is sitting behind C but in front of B
C is sitting behind E.
D is sitting in front of E.
Then in which order are they sitting from first to last row?
(a) DECAB
(b) BACED
(c) ACBDE
(d) ABEDC
Ans.(a)
Sol. DECAB

Q5. Which of the following words cannot be formed with the help of the letters of ‘EXPERIENCE’?
(a) PRICE
(b) NICE
(c) RICE
(d) EXERCISE
Ans. (d)
Because ‘EXPERIENCE’ does not contain letter ‘S’. 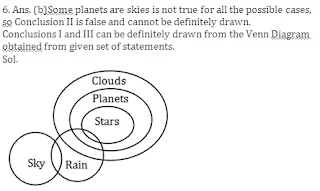 Q9.Rakesh pointed towards the photo of his son and said to Kamla, ‘His mother is the daughter of your mother.’ Find out how is Kamla related to Rakesh?
(a) Sister
(b) Maternal aunt
(c) Sister-in-law
(d) Daughter 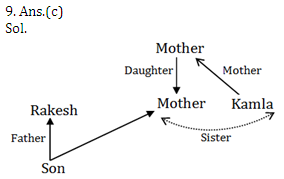 Q10. How many pairs of letters are there in the word ANSWER which have as many letters between them as they have in alphabetical order?
(a) One
(b) Two
(c) Four
(d) None