Dear Aspirants, for GA section you need to practice and memorize all the important points of Polity, History, Geography, Science and current affairs. For polity, we are providing previous years questions which will give you a clear idea about the question types and topics. Approx. 5 to 6 questions are asked from Polity in exams conducted by SSC. Solve this quiz and be better prepared for your exam.
Q1. Which one of the following schedules of the Indian Constitution lists the names of states and specifies their territories?
(a) First
(b) Second
(c) Third
(d) Fourth
S1. Ans.(a)
Q2. Which one of the following statements correctly describes the Fourth Schedule of the Constitution of India?
(a) It contains the scheme of the distribution of powers between the Union and the States
(b) It contains the languages listed in the Constitution
(c) It contains the provisions regarding the administration of tribal areas
(d) It allocates seats in the Council of States
S2. Ans.(d)
Q3.  Under which one of the following Constitution Amendment Acts, four languages were added to the list of languages under the Eighth Schedule of the Constitution of India, thereby raising their number to 22?
(a) 90th Amendment Act
(b) 91st Amendment Act
(c) 92nd Amendment Act
(d) 93rd Amendment Act
S3. Ans.(c)
Q4. Which of the following statements is/are correct?
1. Territory of the constituents of the Indian federation
may be altered by the Parliament by a simple
majority.
2. Consent of the State Legislature is necessary before
the Parliament alters boundaries.
3. President’s recommendation is necessary for
introducing any Bill on redrawing the boundary of a
State.
4. President must have State’s opinion before altering
the name of the State.
(a) 1 only
(b) 1 and 2
(c) 1, 3 and 4
(d) 1 and 3
S4. Ans.(d)
Q5. Which of the following term/s was/were added by the 42nd Amendment act in our Preamble?
1. Socialist
2. Secular
3. Republic
(a) 1 & 2 only
(b) 1 only.
(c) 2 & 3 only
(d) 1, 2 & 3
S5. Ans.(a)
Q6. Regarding equality before law, the Indian Constitution makes exceptions in the case of?
(a) President or a Governor
(b) Foreign sovereigns only
(c) President only
(d) None of the above
S6. Ans.(a)
Q7. The Directive Principles of State Policy are incorporated in?
(a) Part III (Articles 36-51)
(b) Part IV (Articles 36-51)
(c) Part V (Articles 19-21)
(d) Part II (Articles 36-56)
S7. Ans.(b)
Q8. Which Article of the Constitution of India says, ‘No child below the age of fourteen years shall be employed to work in any factory or mine or engaged in any other hazardous employment?
(a) Article 24
(b) Article 45
(c) Article 330
(d) Article 368
S8. Ans.(a)
Q9. If the Chairman of Rajya Sabha becomes acting President,his duties as a Chairman are performed by?
(a) Continues as Chairman
(b) A newly elected Chairman
(c) Deputy Chairman
(d) Member of Rajya Sabha deputed by the Chairman
S9. Ans.(c)
Q10. Who was the President of India at the time of proclamation of emergency in the year 1976?
(a) V.V Giri
(b) Giani Zail Singh
(c) Fakhr-ud-din Ali Ahmad
(d) Shankar Dayal Sharma
S10. Ans.(c)
Q11. Oath of office is administered to the Governor by?
(a) Chief Justice of India
(b) President
(c) Chief Justice of High Court
(d) Speaker of Legislative Assembly
S11. Ans.(c)
Q12. Which one of the following states does not have Vidhan Parishad?
(a) Bihar
(b) Maharashtra
(c) Tamil Nadu
(d) Uttar Pradesh
S12. Ans.(c)
Q13. Which of the following is not correctly matched?
(a) Article 153 – Office of the Governor
(b) Article 156 – Term of the Governor
(c) Article 154 – Executive authority of Governor
(d) Article 155 – Removal of Governor
S13. Ans.(d)
Q14. The lowest unit in the Panchayati Raj institutions is?
(a) a village panchayat
(b) the Panchayat Samiti
(c) Zilla Parishad
(d) the Gram Sabha
S14. Ans.(a)
Q15. The 73rd Constitution Amendment Act, 1992 refers to the?
(a) generation of gainful employment for the unemployed and the under employed men and
women in rural areas
(b) generation of employment for the able bodied adults who are in need and desirous of work
during the lean agricultural season
(c) laying the foundation for strong and vibrant Panchayati Raj institutions in the country
(d) guarantee of right to life, liberty and security of person, equality before law and equal
protection without discrimination
S15. Ans.(c)
General Awareness, GK Capsule for SSC Stenographer , IB (ACIO)2017 Exam
SSC MTS 2017 Exam Analysis (All Shifts) 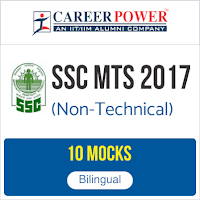