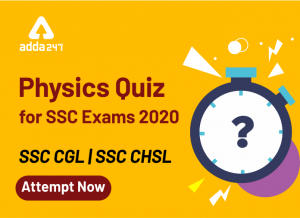 Q4. Optical ﬁbre works on which of the following principle of light?
(a) Reflection
(b) Refraction
(c) Diffraction
(d) Total internal reflection

Q8. The temperature at which a solid melts to become a liquid at the atmospheric pressure is called its ___________.
(a) Crystallisation
(b) Melting point
(c) Evaporation
(d) Galvanisation

S2.Ans.(c)
Sol. The photoelectric effect is an phenomenon in which the emission of electrons occurs when a beam of light strikes a metal or a cathode surface. For emissions of electrons frequency of incident light is required to be greater than a minimum value called Threshold Frequency. Thus, show particle nature of light.

S4. Ans.(a)
Sol. Optical fibre work on the principle of Total Internal Reflection of Light. In optical fibre, when light traveling in an optically dense medium hits a boundary at a steep angle (larger than the critical angle for the boundary), the light is completely reflected. This is called total internal reflection.

S6. Ans.(a)
Sol. Friction is caused by the irregularities on the two surface in contact.

S8. Ans.(b)
Sol.The Melting point of a solid is the temperature at which it changes state from solid to liquid at atmospheric pressure.

S10.Ans.(b)
Sol. The laws which govern the motion of planets are called Kepler’s law of planetary motion.