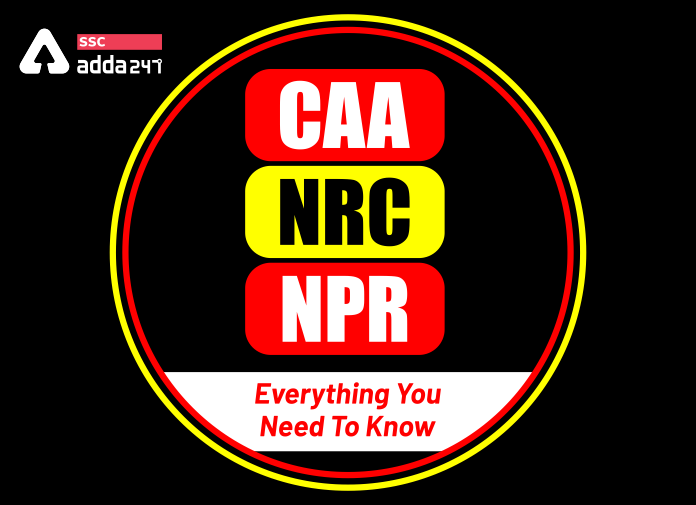 NRC, CAA, NPR: The Controversy over the Citizen Amendment Act has caused national turmoil. With a nationwide protest going up against the CAA that has seen several protests against the govt. and protest turned violent in many places. Updation of the National Population Register (NPR) also brought thousands of people to the streets all across the Nation. Union Cabinet has already cleared an amount of Rs 3,900 crore for updating the National Population Register.

In the wake of all the controversies related to NRC, CAA and NPR we are providing all the information related to it and everything that you need to know.

Q. What is the National Register of Citizens (NRC)?

In the year 1951, NRC identified all the illegal immigrants from Assam on the Supreme Court’s order. This has always remained state-specific exercise to keep its ethnic uniqueness unaltered. But ever since it was implemented there has been a growing demand for its nationwide implementation. Now, many top govt. leaders including Home Minister Amit Shah have proposed that the NRC in Assam will be implemented nationwide. It effectively suggests bringing in a legislation that will enable the government to identify people who have been living in India illegally and deport them to where they came from.

The Citizenship (Amendment) Act, 2019 (CAA) was passed in the Parliament on December 11, 2019. The Citizenship Amendment Act, 2019 seeks to fast-track citizenship for the minority groups in Pakistan, Bangladesh, and Afghanistan. There are six minority groups that have been specifically identified as minorities in the aforementioned countries are Hindus, Jains, Sikhs, Buddhists, Christians and Parsis. The beneficiaries from Citizenship Amendment Bill can reside in any state of India. Currently, the Constitution of India provides for citizenship by naturalization for people who have lived in India for the past 12 months and for 11 of the past 14 years. It also provides citizenship to people whose parents or grandparents were born in India to become Indian citizens.

No. NRC and CAA both are different. The CAA has come into force nationwide after its passage from Parliament, whereas NRC rules and procedures for the country are still to be decided. The NRC process that is going on in Assam has been implemented by the Honourable Supreme Court and mandated by the Assam Accord.

The NPR is a list of usual residents who are living in the country. It is compulsory for every usual resident of India to register in the NPR. It includes both Indian citizens as well as a foreign citizen. The main motive of the NPR is to create a database of every usual resident in the country. It is being prepared at the local (village/sub-town), sub-district, district, state and national level under the provisions of the Citizenship Act 1955 and the Citizenship (Registration of Citizens and Issue of National Identity Cards) Rules, 2003. The data for NPR was first collected in 2010 by the UPA government and it is to be done every 10 years.

Q Will NRC be for people of any particular religion?

NRC has nothing to do with any religion at all. NRC is for all the citizens of India. It is a register of citizen, where the names of every citizen will be recorded.

Q. Will people be excluded in NRC on religious grounds?

NRC is not about any religion at all. Whenever NRC will be implemented, it will not be applied on the basis of religion. No one will be excluded just on the basis that he/she follows a particular religion.

Q. How is citizenship decided? Will it be in the hands of the government?

Q. Will I have to provide details of the birth of parents etc. to prove my Indian citizenship?

It would be sufficient for you to provide the details of your birth such as date of birth, month, year and place of birth. If you do not have the details of your birth, then you will have to provide the same details about your parents. There is absolutely no compulsion to submit any document by/of the parents. Citizenship can be proved by submitting any documents related to date of birth and place of birth. A decision is yet to be taken on such acceptable documents. This is likely to include voter cards, passports, Aadhaar, licenses, insurance papers, birth certificates, school leaving certificates, documents relating to land or home or other similar documents issued by government officials. The list is likely to include more documents so that no Indian citizen has to suffer unnecessarily.

Q. During NRC, will we be asked to show old documents, that are difficult to collect?

Ans. There is nothing like that. Only common documents will be required to prove identity. When the NRC is announced at the national level, then rules and instructions will be made in such a way that no one will face any trouble. The government has no intention of harassing its citizens or putting them in trouble.

Q. What if a person is illiterate and does not have relevant documents?

In this case, authorities will allow that person to bring a witness. Also, other evidence and community verification etc. will also be allowed. A proper procedure will be followed. No Indian Citizen will be put in undue trouble.

Q. There are a large number of people in India who do not have homes, are poor and are not educated and they do not even have any basis of identity. What will happen to such people?

This is not entirely correct. Such people were on some basis and they also go the benefit of the welfare schemes of the government. Their identity will be established on the basis of that.