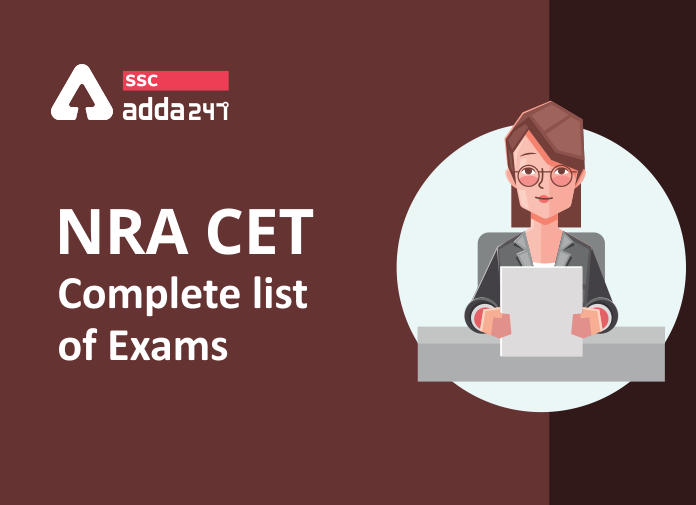 Common Eligibility Test (CET) Exam will be conducted by the National Recruitment Agency to shortlist candidates for non-gazetted Group B and C posts of the government. CET will replace the first-level entrance exams conducted by various government organizations such as Staff Selection Commission, Railway Recruitment Boards and the Institute of Banking Service Personnel. What are the exams covered in the CET? For how many exams will you be eligible after appearing for NRA CET?

The CET exam will be conducted twice a year in up to 12 Indian languages. It will majorly benefit the candidates from rural areas deprived of facilities and who find it difficult to travel for several examinations conducted throughout the year. Check out the complete list of exams expected to covered under the CET. Aspirants looking forward to appearing for the government job examinations next year will have to appear for a single examination if eyeing on Group B and C posts.

List of all Exams To Be Covered Under CET

Common Eligibility test will cover all the posts under Group B and C non-technical category where the preliminary examination is conducted to shortlist or screen the candidates for the next stage. Check out the overview of exams to be covered under CET:

CET by NRA to be conducted in 3 Levels

Common eligibility test will be conducted separately for graduate, 12th pass and 10th pass students based on the educational qualifications and difficulty level. Separate posts will be covered in all three levels based on the eligibility criteria. The selection process through NRA CET will include:

Common Eligibility Test will act as an initial screening test to shortlist aspirants for the next stage. Candidates don’t have to appear for multiple preliminary exams for multiple posts. Common Eligibility Test will reduce the burden on the students and will also save money. The CET score will be valid for 3 years. Candidates can apply for the next level examination of different posts based on their score. The CET will be conducted twice a year.

Once the screening process is successfully conducted by NRA, then the selected candidates will appear for the next level of examination based on the post they will apply. The second round or Mains examination will be conducted by the respective agencies namely SSC, Railway, and IBPS. In order to get finally selected for the post, one has to clear the mains exam of the specific post.

Staff Selection Commission conducts several examinations every year to recruit aspirants to various level of posts. With CET to be introduced next year, all the Tier 1 exams conducted by SSC will be scraped and instead only CET score will be valid to appear for the Tier 2 exam. Check out the list of SSC exams to be covered under CET:

How SSC Will Recruit Through CET? Check In Detail

Railway Recruitment Board: RRB Exams to be covered under NRA CET

How Will Railways Recruit Through NRA CET? Check in detail

As of now, the majority of banking exams comprise of preliminary exam followed by the mains exams and interview. Minimum 10-15 banking recruitments are released every year whether by IBPS, SBI or any other agency. It becomes a tedious task for aspirants to pay the online fee every time and appear for multiple exams. Banking exams namely IBPS Clerk, IBPS RRB, IBPS PO etc will now hold a single preliminary exam included in CET. The marks scored in CET will act as the preliminary score and based on that data, candidates will be selected for the mains exam by multiple agencies.