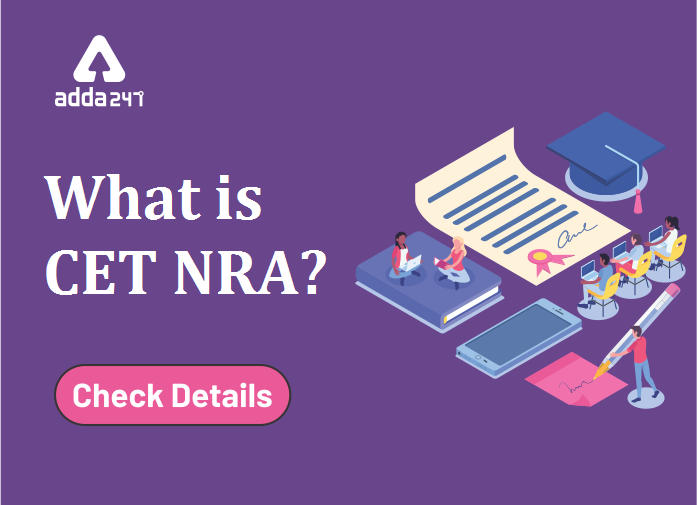 The Union Cabinet under the guidance of PM Narendra Modi has given its approval for the creation of a National Recruitment Agency (NRA) to streamline the hiring process by conducting a common eligibility test (CET). The NRA CET 2022 will replace the 1st level tests conducted by the three agencies namely Staff Selection Commission (SSC), the Railway Recruitment Board (RRB) and the Institute of Banking Personnel Selection (IBPS) for the recruitment to Group B and C non-gazetted posts.

The National Recruitment Agency (NRA) is likely to start conducting common eligibility test (CET) at the end of the year 2022. Union Minister Jitendra Singh stated that the agency will only conduct preliminary screening of candidates and the final recruitment will be done through domain specific examinations or tests by the respective recruiting bodies. Initially NRA will conduct exams for Staff Selection Commission (SSC), Railway Recruitment Boards (RRBs) and Institute of Banking Personnel Selection (IBPS).

Union Minister Jitendra Singh said that NRA has been set up to provide the same platform to all candidates at the nearest district headquarter and with a view to set a new standard of equity and inclusiveness in recruitment. NRA will only conduct the preliminary screening of candidates. The final recruitment will be done through domain-specific examinations or tests, which will be conducted by the respective agencies such as SSC, RRBs, and IBPS. Based on the score obtained in CET conducted by NRA, candidates may appear in domain-specific exam or tests to be conducted by respective recruitment agencies. NRA CET test scores will be valid for a period of three years and there will be no bar in the number of attempts by a candidate. The exam is expected to be conducted twice a year. Around 2.5 crore aspirants appear for separate recruitment examinations every year for selection to around 1.25 lakh government jobs. In order to ease the recruitment process, the step has been taken by the government to introduce NRA Exam. 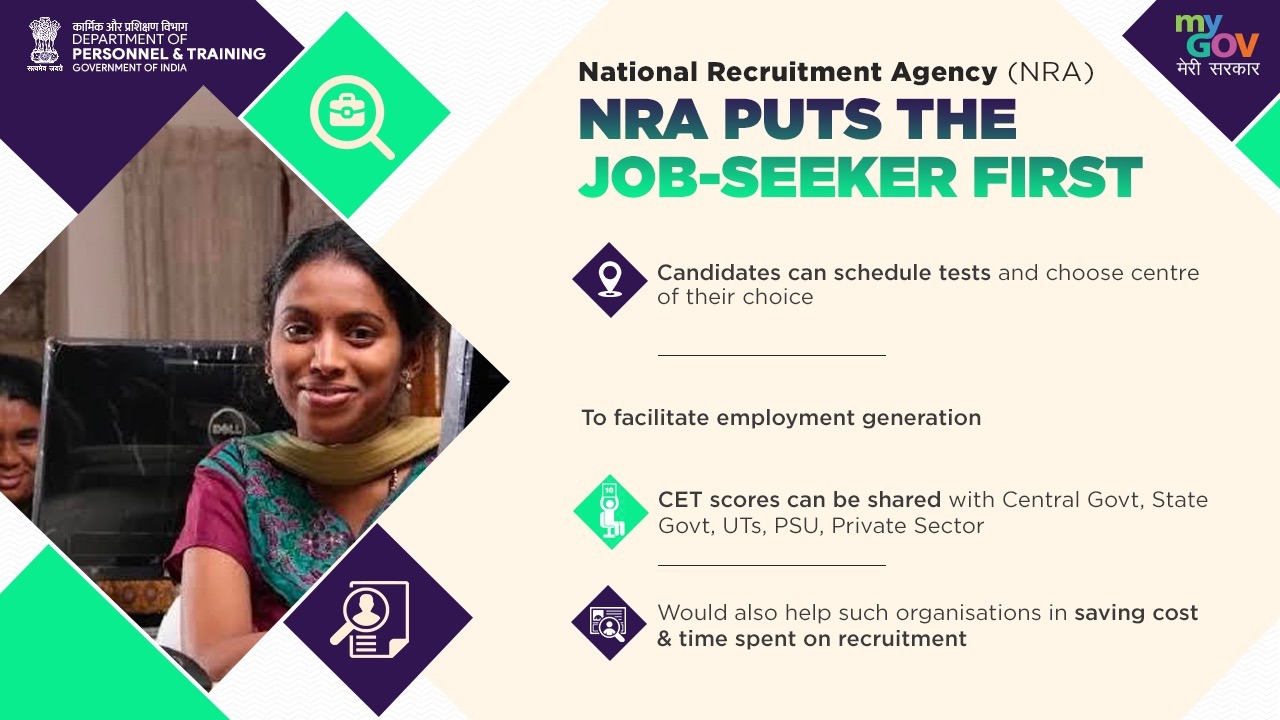 A multi-agency body called National Recruitment Agency will be formed that would conduct a single computer-based examination for the recruitment in non-gazetted government posts from 2022. The agency will be responsible for conducting the Common Eligibility Test for selection to government jobs. Currently, multiple exams are being conducted for over 2.5 crore candidates each year. The recruitment process takes approx 18 months and more to complete one cycle. The implementation of NRA CET will provide a level playing field for all candidates and will be treated as a preliminary examination for specialized posts.

A single examination will also reduce the financial burden on candidates to a large extent. Candidates will not appear for multiple first stage examinations and common exam i.e CET BY NRA will be held for the preliminary stage.  It would significantly reduce the recruitment cycle and will make sure the recruitment process is completed within time. NRA would be a specialist body bringing the state-of-the-art technology and best practices to the field of Central Government recruitment. 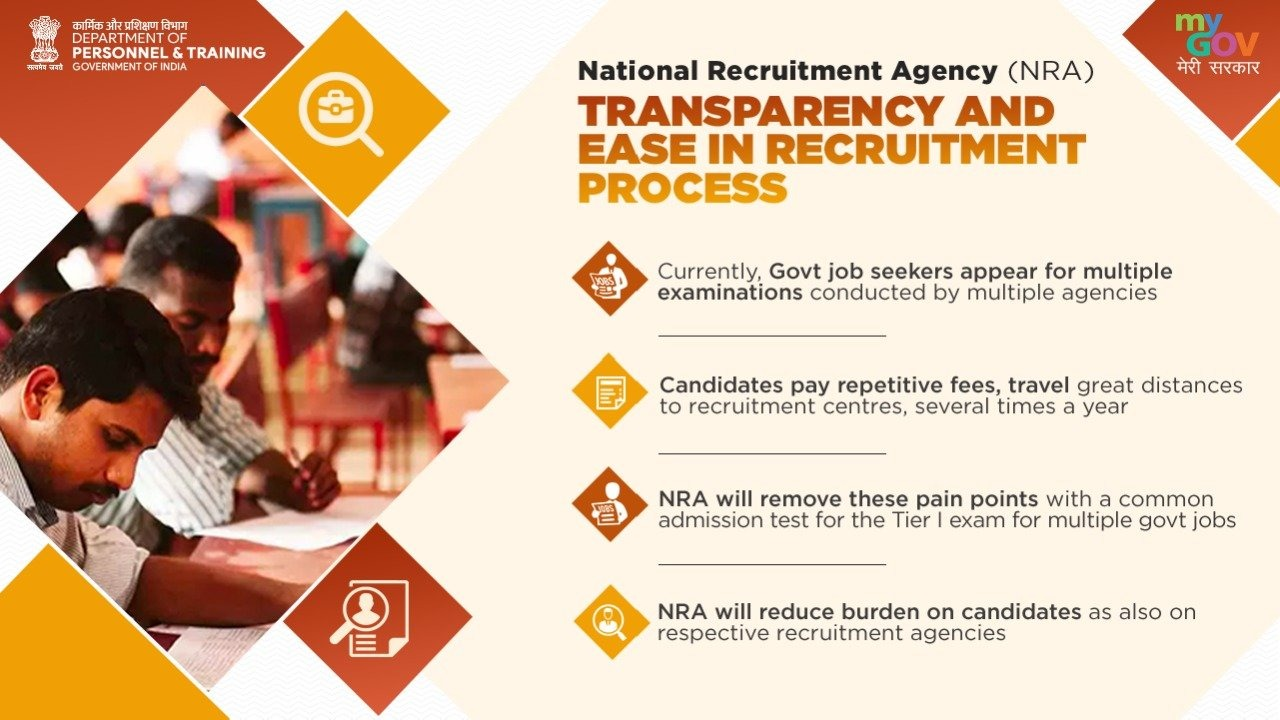 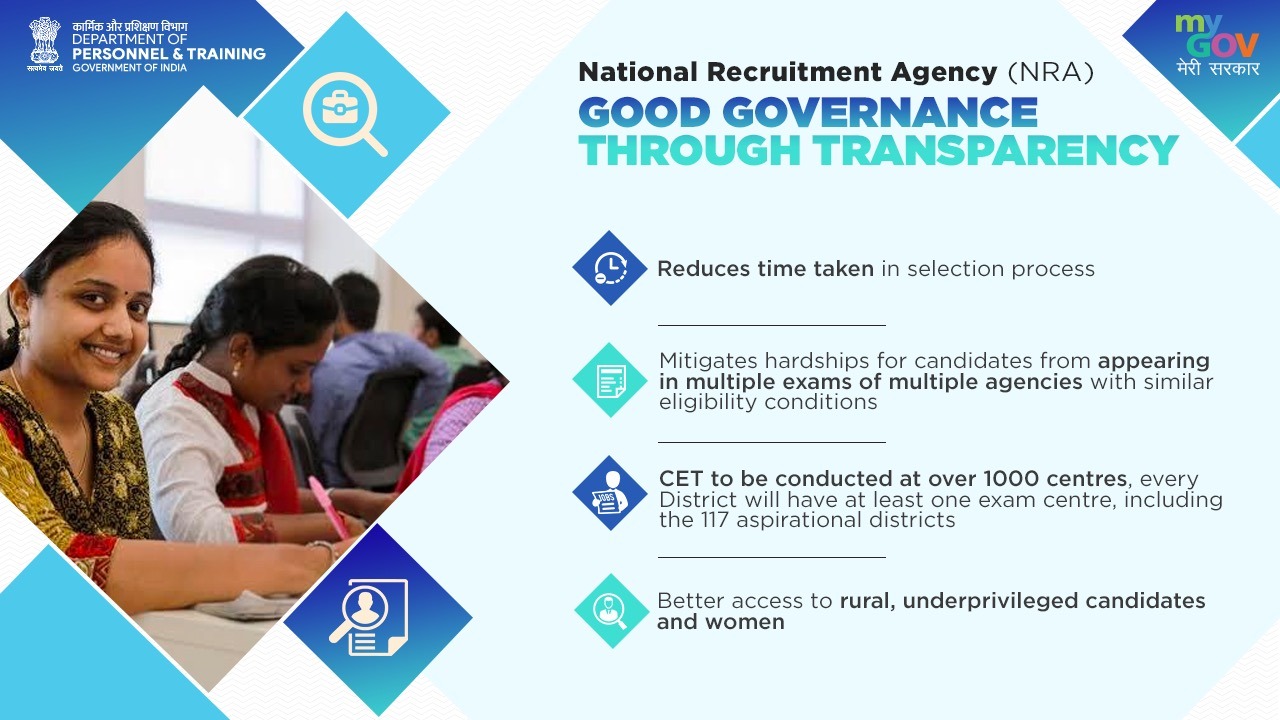 The functions of the NRA or National recruitment agency will include:

How to Apply for NRA CET?

Under the new system, candidates would be required to apply through a common portal and prepare from a common curriculum. The official website for NRA will be formed where candidates will be required to apply for CET. A standardised question paper with multiple questions of similar difficulty levels will be set in a central server. The Scores of the candidates will be generated quickly in this process, delivered online and will be valid for a 3-year period. The exam will be held twice a year.

Some of the points regarding NRA CET guidelines highlighted by the Department of Personnel & training includes: 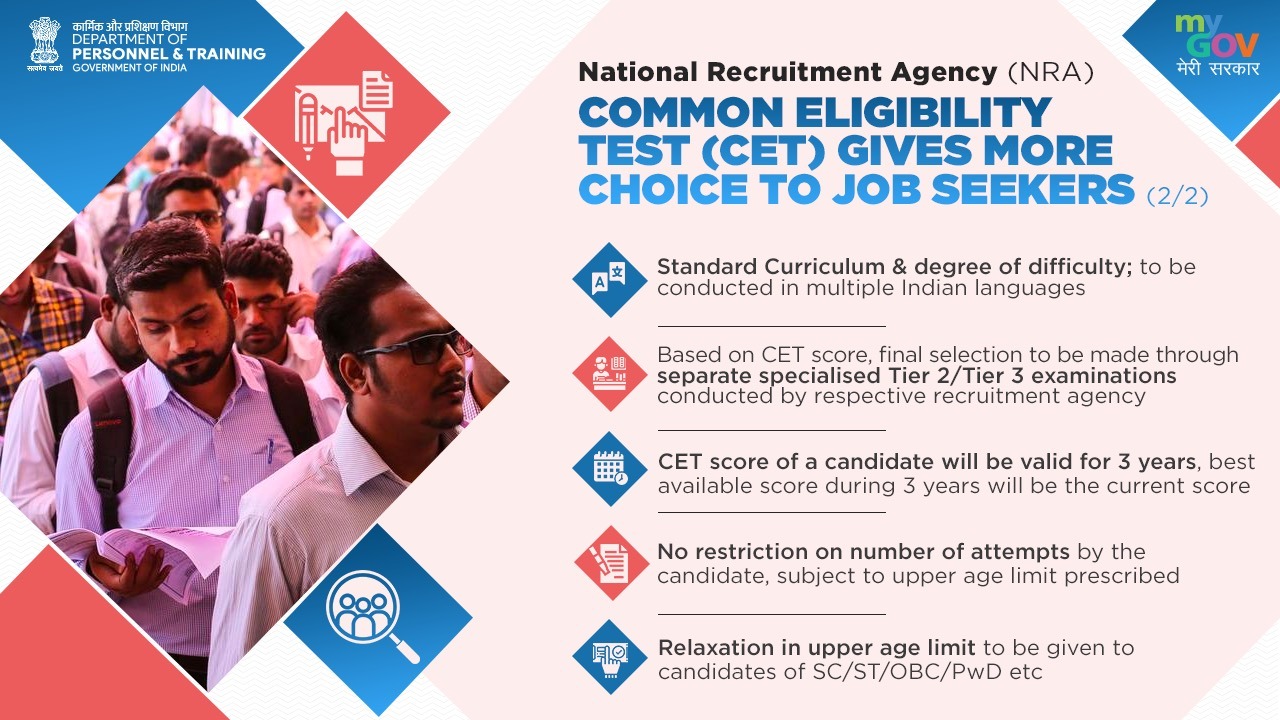 How will NRA CET benefit millions of aspirants?

NRA CET 2020 – 2021 will benefit millions of government job aspirants and will act as a boon for the people. It will make sure that candidates don’t have to go through multiple examinations and will share less burden. The CET will reduce the recruitment process and hence, aspirants will get an early appointment to jobs as compared to now. The CET score could also be shared with other recruiting agencies in the Central Government apart from the mentioned including State Governments/Union Territories, Public Sector Undertaking and Private Sector. This would help these organizations in saving costs and time spent on recruitment.

Presently, the candidates will have to appear in multiple examinations to be conducted by multiple agencies. It results in spending thousands of rupees on different forms. A single examination will reduce the financial burden on poor candidates to a large extent. Women candidates are also expected to benefit greatly.

Introduction of NRA CET in Budget

Union Budget 2020 was presented by the Union Minister of Finance, Nirmala Sitharaman on 1st Feb 2020 where the allocation to different sectors was provided based on the expenditure and income of the government. The education sector was allotted Rs 99,300 crore for FY 2020-21 and Rs 3,000 crore for skill development. The Finance Minister in her speech proposed the idea of some of the major reforms in the recruitment of non-gazetted government posts.  This step is being taken to mitigate the hardships faced by the students in appearing for multiple exams. As per the ministry, the CET will save time and efforts of the students planning to be appointed in Group B and Group C posts. It will also save the money spent by candidates in filling up ‘n’ number of posts.

Q. What is NRA CET?
National Recruitment Agency (NRA) will conduct the Common eligibility test (CET) for the recruitment of Group B and C government posts in SSC, Banking and railways.

Q. What is the educational qualification required for NRA CET?
The NRA CET exam will be conducted separately for Graduates (Degree), 12th Class (Higher Secondary) Pass and 10th Pass candidates.