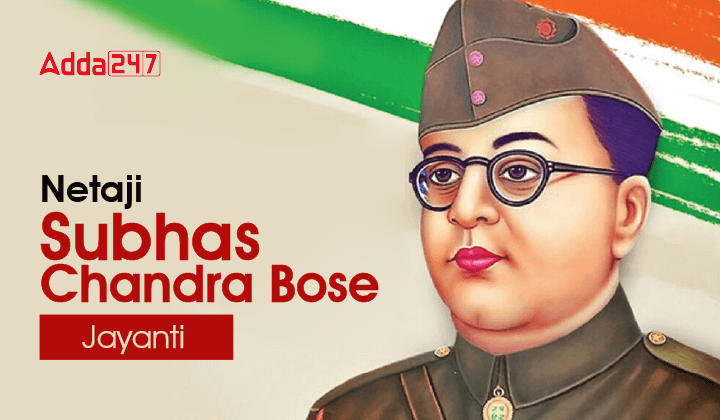 Netaji Subhash Chandra Bose was born on 23rd January 1897 in Cuttack, Odisha. Today is the 126th birth anniversary of one of the greatest personalities of the Indian Freedom Movement. The birth anniversary of Netaji is celebrated as “Parakram Diwas” across the country. Netaji Subhash Chandra Bose is one of the most iconic figures in Indian history. He is remembered as a freedom fighter, leader, and patriot who dedicated his life to the cause of Indian independence.

Netaji was a brilliant student and graduated from the University of Calcutta with a degree in philosophy. He then went to England to pursue higher studies and appeared for the Indian Civil Services examination but resigned from his position as a civil servant in order to join the Indian independence movement. He believed that India’s freedom could only be achieved through armed struggle and not through peaceful means.

He was popularly known, Netaji was a strong leader and believed in the power of armed struggle against British colonial rule. He formed the Indian National Army (INA) and worked closely with other leaders such as Mahatma Gandhi and Jawaharlal Nehru to fight for India’s freedom.

Netaji joined the Indian National Congress and worked closely with leaders such as Mahatma Gandhi and Jawaharlal Nehru to fight for India’s freedom. However, he disagreed with their methods of non-violent resistance and believed in the power of armed struggle. He formed the Indian National Army (INA) and worked tirelessly to mobilize support and resources for the independence movement.

Netaji’s leadership and sacrifice for India’s freedom inspired many young people to join the independence movement. He led the INA in a series of battles against the British and his efforts played a significant role in weakening the British grip on India. However, due to a lack of support and resources, the INA was ultimately defeated by the British.

Netaji’s slogan ‘Jai Hind‘ became India’s national anthem. He used the slogan ‘Delhi Chalo’ while addressing the army as Supreme Commander in front of Singapore’s Town Hall. Subhash Chandra Bose was the one who referred to Gandhiji as the Father of the Nation.

This is one of the famous and iconic slogans recited by Netaji Subhash Chandra Bose to encourage the Indians for freedom. His leadership, courage, and belief in armed struggle played a significant role in India’s struggle for independence. His legacy continues to inspire Indians to this day and his ideas and principles continue to be relevant in the present day.

Netaji’s death on 18th August 1945 in Japanese-ruled Formosa (now Taiwan in a plane crash remains a mystery, with various theories about his death. Some believe he died in a plane crash, while others claim that he faked his own death and lived in hiding. Regardless of the circumstances of his death, his legacy lives on. He is remembered as a brave and courageous leader who never gave up on his fight for freedom. His ideas, principles, and sacrifices continue to inspire Indians to this day.

Today, on January 23rd, the entire nation remembers him on his birthday. On this day, Netaji Subhash Chandra Bose Jayanti is observed which was also named Parakram Diwas by Prime Minister Narendra Modi. So on this special day, we pay special tribute to Netaji on his birthday. On this Netaji Subash Chandra Bose Jayanti 2023, let’s remember the legacy of this great leader and take inspiration from his life to work towards building a better India.

What is the birth date of Netaji Subhash Chandra Bose?

When was Subhas Chandra Bose died?