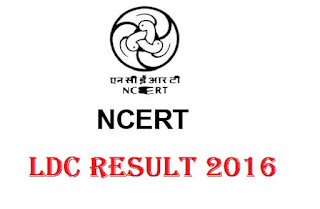 National Council Of Educational Research & Training(NCERT) has released the result for the Post of LDC(Lower Division Clerk). The written exam was held on 4th December 2016.

Pay Scale: Rs.5200-20200 with Grade pay of Rs.1900/-
Note: Typing speed of 35 w.p.m. in English or 30 w.p.m. in Hindi corresponding to 10500 KDPH on an average of 5 key depression for each word is required to qualify the skill test.
Instructions for the Typing Test:-
Click here for Result and Skill Test Date
You may also like to read: