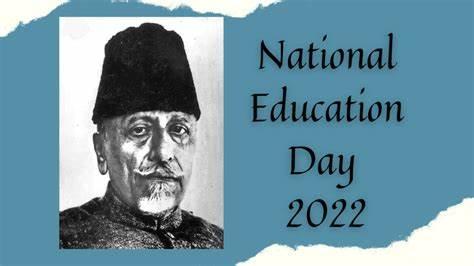 On September 11, 2008, the Ministry of Human Resource Development announced: “The Ministry has chosen to remember this outstanding son of India’s commitment to the cause of education in India in honour of his birthday. From 2008 onward, November 11 will be recognised annually as National Education Day and made a holiday.” All of the nation’s educational institutions observe the day with lectures, symposiums, essay-writing and elocution competitions, workshops, rallies, and banner cards and slogans highlighting the value of literacy and the devotion of the country to all facets of education.

Azad was a reformer and a liberation warrior who vowed to use education to strengthen his country. From August 15, 1947, to February 2, 1958, he was minister of education. During this time, the UGC, AICTE, Kharagpur Institute of Higher Education, Secondary Education Commission, and University Education Commission were all founded. Azad also had a big impact on the founding of other important educational institutions, like Jamia Millia Islamia and IIT Kharagpur.

“Educationists should be able to build the creative spaces for inquiry, morality, and leadership for students and become role models for them to follow”.– Maulana Abul Kalam Azad

“One who is not moved by music is unsound of mind and intemperate; is far from spirituality and is denser than birds and beasts because everyone is affected by melodious sounds.” – Maulana Abul Kalam Azad

Azad organised the non-cooperation campaign in opposition to the 1919 Rowlatt Acts and grew to be an ardent admirer of Gandhi’s principles of nonviolent civil disobedience. Azad vowed to uphold Gandhi’s principles, which included advancing Swadeshi goods and the cause of Indian Swaraj. At the age of 35 in 1923, He assumed the position of President of the Indian National Congress at the age of 32.

Azad was chosen in October 1920 to serve on the foundation committee for the Jamia Millia Islamia in Aligarh, Uttar Pradesh, without the assistance of the British colonial administration. In 1934, he helped with the relocation of the university’s campus from Aligarh to New Delhi. He is honoured by having his name on the main entrance (Gate No. 7) of the university’s main campus.

Ques. When is National Education Day 2022 in India?

Ques. When is National Education Day?

Ans. Every year on November 11, National Education Day is observed to honour Maulana Abul Kalam Azad, India’s first minister of education, and his contributions to society.

Ques. What is the significance of International Education Day in India?

Ans. The day is also regarded as a chance to honour Abul Kalam’s role in building an independent India’s educational foundation and in assessing and enhancing the nation’s present performance in the subject. India struggled to thoroughly restructure and stabilise its institutions and industries after gaining independence in 1947.