Dear students only 48 days are left and for SSC CGL(Tier-I) Exam 2017 we have provided 60 Days Plan, Today is the 13th Day of plan, so according to that plan we are providing Miscellaneous Questions of Ranking, Syllogism & Direction Sense of Reasoning quiz in accordance with the syllabus of SSC CGL Tier-I. Daily we will follow this plan which will really help you in getting more marks in the final exam.

Q1. Jai walks 10 km towards North. From there he walks 6 km towards South. Then, he walks 3 km towards East. Then he takes a left turn and walks 6 km. In which direction is he with reference to his starting point?
(a) Southeast
(b) Northeast
(c) Southwest
(d) Northwest
Ans.(b)
Sol. 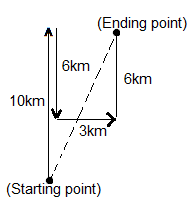 Ending point is in northeast direction with reference to his starting point.

Q3. Mukesh left for his office in his car. He drove 10km towards East and then 3km towards North. He then turned to the west and covered 2km. Then he turned to north again & moved 3km. Further he turned towards east & covered 2 km. Finally he turned left and moved 4km. How much distance he covered & in which direction is he from his starting point?
(a) 26 km, Northwest
(b) 25 km, Southeast
(c) 24 km, Northeast
(d) 30 km, Southwest
Ans.(c)
Sol. 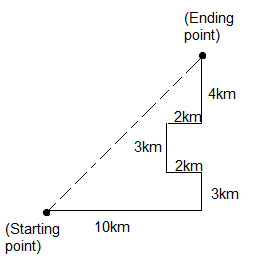 Directions (4-5): Study the information given below carefully and answer the questions that follow:
On a playing ground, Dinesh, Kunal, Nitin, Atul and Prashant are standing as described below facing the North.
(i) Kunal is 40 metres to the right of Atul.
(ii) Dinesh is 60 metres to the south of Kunal.
(iii) Nitin is 25 metres to the west of Atul.
(iv) Prashant is 90 metres to the north of Dinesh.

Q7. A man is performing yoga with his head down and legs up. His face is towards the east. In which direction will his left hand be?
(a) North
(b) South
(c) East
(d) West
Ans.(b)
Sol.

The posture of the man is as shown. Clearly, the left hand points towards South. 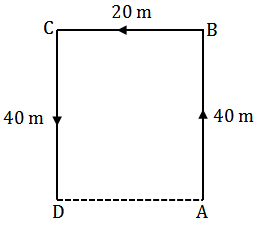 From the venn diagram we infer that Only conclusion I follow. 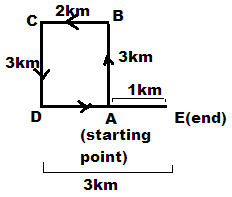 
Directions (14):  You have to consider the statement to be true, even if it seems to be at variance from commonly known facts. You have to decide which of the given conclusions I, II, III & IV , if any, follow from the given statements.
Q14. Statements:
1. All teachers are actors.
2. Some actors are women.
Conclusion:
I. All teachers are women.
II. Some women are teachers.
III. Some women are actors.
IV. All actors are teachers.
(a) Only Conclusion I follows
(b) Only Conclusion II & IV follows
(c) Only Conclusion III follows
(d) None of the conclusions follows.
Ans.(c)
Sol.

From the venn diagram we infer that only Conclusion III follows.