Here we are providing a Reasoning quiz in accordance with the syllabus of  SSC Stenographer Grade ‘C’ & ‘D’ Exam 2017 and IB (ACIO). This post comprises 15 Questions of Miscellaneous Questions which will really help you get more marks in the final exam.
Q1. In a certain code language, ROUTINE is written as VMRGFLI. How will CRUELTY be written in that code language?
(a) VOCVZRL
(b) VPCVZRL
(c) VPVCZRL
(d) None of these

Q2. In this question, jumbled letters of a meaningful word are given. You have to rearrange these letters and select from the given alternatives the word which is almost similar in meaning to the rearranged word.
H N A G S R I
(a) Impress
(b) Compose
(c) Decorate
(d) Impose

Q3. If we substitute 1 to 24 indicating hours on the dial of a clock day and night by the letters of the English alphabet in their order starting with ‘C’ which letter will represent 18 hours?
(a) W
(b) P
(c) T
(d) R

Q5. If it is possible to make a number which is perfect square of a two-digit odd number with the fourth, the sixth and the seventh digits of the number 187642539, which of the following is the digit in the unit’s place of that two-digit odd number?
(a) 1
(b) 7
(c) 9
(d) None of the above

Q8. Find the missing character in the below figure form the given alternatives? 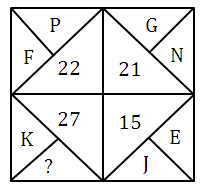 Q10. Unscramble the letters in the given words and find the odd one out:
(a) EIWNTR
(b) UMRSME
(c) PIGRSN
(d) LCUOD

Q11. A meaningful word starting with A is made from the first, the second the fourth, the fifth and the sixth letters of the word CONTRACT. Which of the following is the middle letter of that word?
(a) C
(b) O
(c) T
(d) R

Directions (12-13): In each of the following questions, a word has been given, followed by four other words, one of which cannot be formed by using the letters of the given word. Find that word.
Q12. ESTRANGEMENT
(a) TANGENT
(b) GERMAN
(c) TREATMENT
(d) ENTREAT

S1. Ans.(d)
Sol. Each letter in the word is replaced by the letter which occupies the same position from the other end of the English alphabet, and the group of letters so obtained is then written in the reverse order to get the code. Thus, we have:
CRUELTY → XIFVOGB → BGOVFIX 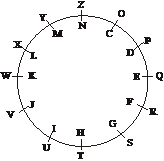 From the venn diagram we infer that neither conclusion I nor II follows.

S10. Ans.(d)
Sol. Rearranging the letters, the given words are:
(a) WINTER (b) SUMMER (c) SPRING (d) CLOUD
Clearly, all except CLOUD are names of seasons.
Hence, the answer is (d).

S11. Ans.(c)
Sol. The first, second, fourth, fifth and sixth letters of the word CONTRACT and C, O, T, R, A respectively. The word formed is ACTOR, in which the middle letter is T.

S12. Ans.(c)
Sol. TREATMENT cannot be formed by using the letters of ESTRANGEMENT.

S13. Ans.(a)
Sol. RANDOM cannot be formed by using the letters of VENTURESOME. 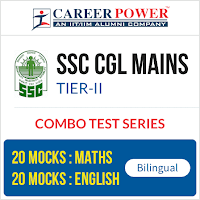