The Staff Selection Commission or SSC is one of the leading Govt. Organizations that are responsible for employing the candidates for the service of the nation. It conducts a no. of exam for the graduates, 12th Pass, and 10th Pass candidates annually. Each year over lakhs and lakhs of applications are filed online for the exams conducted by it. A job under the SSC provides better facilities, services in every aspect of our lives, and the development of our country.

SSC CHSL 2019 TIER I exam was conducted from 17th to 19th March 2020 then due to pandemic the exam later conducted from 12th October 2020 to 26th October 2020. The SSC CHSL TIER I exam result was announced on 15th January 2021. The TIER II of the SSC CHSL has been scheduled for 14th February 2021. TIER II is a descriptive type of examination. The candidates qualifying for the TIER I of the examination will be able to appear for the TIER II.

Staff Selection Commission conducts Combined Graduate Level exam every year to fulfill vacancies in various Central Government Departments. SSC CHSL Tier-II is a descriptive type exam in which Essay writing, Letter writing is asked. Here is a list of the most expected essay topics from the current situations that could be asked for the SSC CHSL descriptive paper. We are going to publish the below topics according to the date shown in the below table. This will help the candidates with descriptive writing. 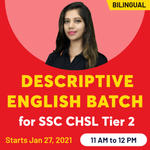