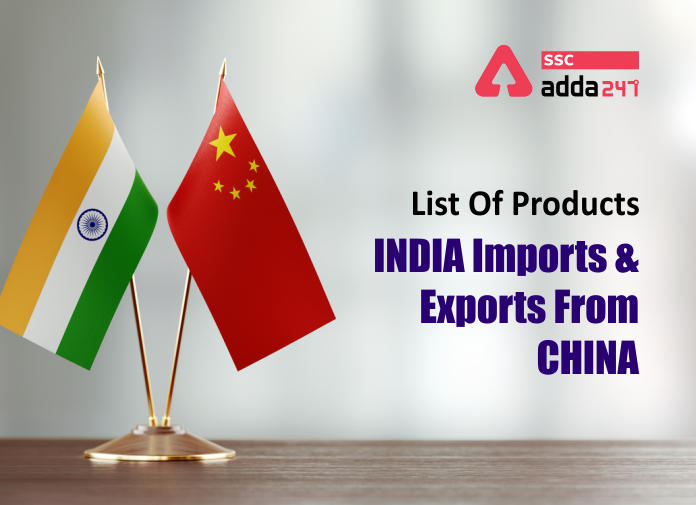 The tension between India & China is escalating and this has again propelled the anti-China narrative wherein traders are again calling for a reduction in consumer goods imported from China. The Chinese product list in India is very big. China is India’s biggest trade partner we import more from China than any other nation. The local trader’s body, Confederation of All India Traders (CAIT) has said that it will boycott Chinese goods and lend support to indigenous products. The move comes after India and China engaged in skirmishes at the Galwan Valley earlier. As per the several reports, India’s state-run telecom companies may stop sourcing equipment from Chinese companies. Today we are looking at the China product list in India and products India Imports and Exports to China.

For the period between April 2019 and February 2020, China accounted for 11.8% of India’s total imports. However, India’s total exports to the country were just 3%. It is clear from this deficit that we buy more from China than we sell. This trade deficit with China is also a major contributor to India’s overall trade deficit It is also one of the world’s biggest trade deficits between two nations. Officially, China’s Foreign Direct Investment in India stands at over $2.34 billion. In 2019, Chinese export to India was at $68 billion while imports stood at $16.32 billion. This means India has a trade deficit of around $52 billion. Alibaba, Xiaomi, Tencent, China-Eurasia Economic Cooperation Fund, Didi Chuxing, Shunwei Capital and Fosun Capital are some of the prominent Chinese arms that have invested in Indian startup firms. Also, some well-known Indian startup brands to have received Chinese investments include Paytm, Ola, Snapdeal, and Swiggy. Alibaba has invested in Paytm.

India has good relations with numerous countries of the world. The table below shows India’s 10 largest destinations for exports in 2019-2020

China and the United States are two of the biggest trade partners of India. The table below shows India’s 10 largest destinations for import in 2019-2020