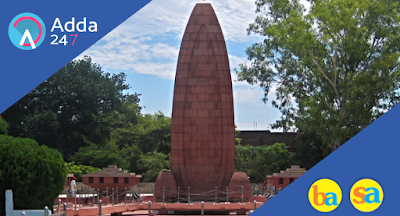 The 1919 Amritsar massacre, known alternatively as the Jallianwala Bagh massacre after the Jallianwala Bagh (Garden) in the northern Indian city of Amritsar, was ordered by General R.E.H. Dyer. On Sunday, April 13, 1919, which happened to be ‘Baisakhi’, one of Punjab’s largest religious festivals, fifty British Indian Army soldiers, commanded by Brigadier-General Reginald Dyer, began shooting at an unarmed gathering of men, women, and children without warning. Dyer marched his fifty riflemen to a raised bank and ordered them to kneel and fire. Dyer ordered soldiers to reload their rifles several times and they were ordered to shoot to kill. Official British Raj sources estimated the fatalities at 379, and with 1,100 wounded. Civil Surgeon Dr. Williams DeeMeddy indicated that there were 1,526 casualties. However, the casualty number quoted by the Indian National Congress was more than 1,500, with roughly 1,000 killed.
On April 13, the holiday of Baisakhi, thousands of Hindus, Sikhs, and Muslims gathered in the Jallianwala Bagh (garden) near the Harmandir Sahib in Amritsar. Baisakhi is a Sikh

festival, commemorating the day that Guru Gobind Singh founded the Khalsa Panth in 1699, and also known as the ‘Birth of Khalsa.’ During this time people celebrate by congregating in religious and community fairs, and there may have been a large number who were unaware of the political meeting. 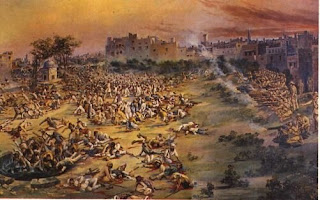 The Jallianwala Bagh was bounded on all sides by houses and buildings and had few narrow entrances, most of which were kept permanently locked. The main entrance was relatively wider but was guarded by the troops backed by the armored vehicles. General Dyer ordered troops to begin shooting without warning or any order to disperse and to direct shooting towards the densest sections of the crowd. He continued the shooting, approximately 1,650 rounds in all until ammunition was almost exhausted.

The Viceroy of India Lord Chelmsford was appointed on 10 December 1917, a Sedition Committee, popularly known as Rowlett Committee after the name of its chairman, to investigate and report on the nature and extent of the criminal conspiracies connected with the revolutionary movement in India, and to advise as to the legislation necessary to deal with them. Based on the recommendations of this committee, two bills, popularly called Rowlett Bills, were published in the Government of India Gazette on 18 January 1919. Mahatma Gandhi decided to organize a satyagraha, non-violent civil disobedience campaign) against the bills. One of the bills became an Act, nevertheless, on 21 March 1919. Call for a countrywide hartal or general strike on 30 March, later postponed to 6 April 1919, was given by Mahatma Gandhi.

The site, Jallianwala Bagh became a national place of pilgrimage. Soon after the tragic happenings of the Baisakhi day, 1919, a committee was formed with Pandit Madan Mohan Malaviya as president to raise a befitting memorial to perpetuate the memory of the martyrs. The Bagh was acquired by the nation on 1 August 1920 at a cost of 5,60,472 rupees but the actual construction of the memorial had to wait until after Independence. The monument befittingly named the Flame of Liberty, build at a cost of 9, 25,000 rupees, was inaugurated by Dr. Rajendra Prasad, the first President of the Republic of India, on 13 April 1961. The central 30-ft high pylon, a four-sided tapering stature of red stone standing in the midst of a shallow tank, is built with 300 slabs with Ashoka Chakra, the national emblem, cursed on them. A stone lantern stands at each corner of the tank. On all four sides of the pylon the words, “In memory of martyrs, 13 April 1919″, has been inscribed in Hindi, Punjabi, Urdu and English. A semi-circular verandah skirting a children’s swimming pool near the main entrance to the Bagh marks the spot where General Dyer’s soldiers took the position to fire at the gathering.

Annotation: On 13th April 1919, a Sikh teenager who was being raised at Khalsa Orphanage named Udham Singh saw the happening with his own eyes and avenged the killings of 1300+ of his countrymen by killing Michael O’Dwyer in Caxton Hall of London. On the 31st July 1940, Udham Singh was hanged at Pentonville jail, London.