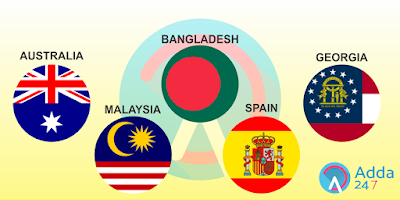 The knowledge of Static Awareness is very important for all govt. Examinations whether it is SSC, Banking or UPSC. The knowledge of Current Affairs and various important facts about different countries can also give you an upper hand in interviews and cracking General Awareness section. Recently Bangladesh was in new for its 46th Independence Day celebration and India extended $4.5 billion new line of credit to Bangladesh. Malaysia signed seven agreements with India and recently there was a MoU approved between India and Australia on cooperation in the field of Health and Medicine.

Generally, the questions that you’ll face in the examination will be from countries currently in news for various reasons, so it is important to be updated and revise facts about them. Read further to brush your general knowledge about Australia, Bangladesh, Georgia, Malaysia and Spain.

Australia is a country and continent surrounded by the Indian and Pacific oceans. Its major cities – Sydney, Brisbane, Melbourne, Perth, Adelaide – are coastal. The country is known for its Sydney Opera House, the Great Barrier Reef, a vast interior desert wilderness called the Outback, and unique animal species like kangaroos and duck-billed platypuses.

1. Australia is the world’s 6th largest country by area.
2. Australia is home to a variety of unique animals, including the koala, kangaroo, emu, kookaburra and platypus.
3. Australia hosted the 1956 (Melbourne) and 2000 (Sydney) Summer Olympics.
4. Australia was the second country in the world to allow women to vote (New Zealand was first).

Bangladesh, to the east of India on the Bay of Bengal, is a South Asian country marked by lush greenery and many waterways. Its Padma (Ganges), Meghna and Jamuna rivers create fertile plains, and travel by boat is common. On the southern coast, the Sundarbans, an enormous mangrove forest shared with Eastern India, is home to the royal Bengal tiger.

Georgia, a country at the intersection of Europe and Asia, is a former Soviet republic that’s home to Caucasus Mountain villages and Black Sea beaches. It’s famous for Vardzia, a sprawling cave monastery dating to the 12th century, and the ancient wine-growing region Kakheti.

1. Georgia was founded by James Oglethorpe on February 12, 1733. It was the thirteenth of the 13 original colonies.
2. Martin Luther King, Jr. was born in Atlanta on January 15, 1929. Today you can visit his childhood house and museum maintained by the U.S. Department of Interior’s National Parks Service.
3. Georgia became a state on January 2, 1788.

Malaysia is a Southeast Asian country occupying parts of the Malay Peninsula and the island of Borneo. It’s known for its beaches, rainforests and mix of Malay, Chinese, Indian and European cultural influences.

1. The largest undivided leaf in the world, Alocasia macrorrhiza, comes from the Malaysian state of Sabah.
2. Malaysia is the only place in the world where the war against Communism was won.
3. Malaysia’s Kinabalu National Park is home to the parasitic Rafflesia arnoldii, or corpse flower.

1. Nudity is legal in Spain.
2. The United Nations projects that Spain will be the world’s oldest country by 2050.
3. Spain has Europe’s biggest wealth gap.
4. Spain has 44 UNESCO World Heritage Sites – pre-historic rock art, historic cities and buildings, bridges, national parks and landscapes. Only Italy with 49 sites and China with 45 have more.