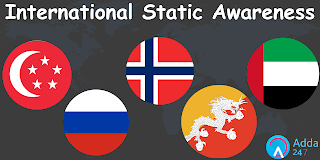 The knowledge of Static Awareness is very important for all govt. Examinations whether it is SSC, Banking or UPSC. The knowledge of Current Affairs and various important facts about different countries can also give you an upper hand in interviews and cracking General Awareness section. Recently UAE was in the news as Amazon made an entry in UAE by acquiring Souq.com and Norway Ranked No.1 on Human Development Index. Russia was also in the news as Russian VTB Bank decided to close its only office in India. India, Singapore sign 3rd protocol for amending DTAA and Bhutan was is news as its Prime Minister Tshering Tobgay attended the inaugural ceremony of ‘Namami Brahmaputra’ festival in Assam.

Generally the questions that you’ll face in examination will be from countries currently in news for various reasons, so it is important to be updated and revise facts about them. Read further to brush your general knowledge about Norway, Russia, Singapore, Bhutan and U.A.E.
Norway

Norway (in Europe) is a Scandinavian country encompassing mountains, glaciers and deep coastal fjords. Oslo, the capital, is a city of green spaces and museums. Preserved 9th-century Viking ships are displayed at Oslo’s Viking Ship Museum. Bergen, with colorful wooden houses, is the starting point for cruises to the dramatic Sognefjord. Norway is also known for fishing, hiking and skiing, notably at Lillehammer’s Olympic resort.

Important Facts about Norway:
1. Norway has become the first country to cease FM radio broadcasting.
2. Human Development Index is topped by Norway for 2015.

Important Fact about Russia:
1. Russian Railways is helping India’s national transporter increase the speed of its passenger trains up to 200 km per hour.
2. Russia is the largest country in the world by area.
3. Russian bank VTB has decided to close its only office in New Delhi, India to cut costs but will continue to work in India, the bank stated.

Singapore, an island city-state off southern Malaysia, is a global financial center with a tropical climate and multicultural population. Its colonial core centers on the Padang, a cricket field since the 1830s and now flanked by grand buildings such as City Hall, with its 18 Corinthian columns. In Singapore’s circa-1820 Chinatown stands the red-and-gold Buddha Tooth Relic Temple, said to house one of Buddha’s teeth.

Important facts about Singapore:
1. India has received the maximum FDI inflows from Singapore in 2015-16 followed by Mauritius, the US, the Netherlands and Japan.
2. Singapore Exchange Limited is an investment holding company located in Singapore and provides different services related to securities and derivatives trading and others.

Bhutan is officially the Kingdom of Bhutan is a landlocked country in Asia and the smallest state located entirely within the Himalaya mountain range. Located in the Eastern Himalayas, it is bordered by China in the north and India in the south. Bhutan lacks a border with nearby Nepal due to the Indian state of Sikkim and with Bangladesh due to the Indian states of West Bengal and Assam. Bhutan is geopolitically in South Asia and is the region’s second least populous nation after the Maldives.

The United Arab Emirates is an Arabian Peninsula nation settled mainly along the Persian (Arabian) Gulf. The country is a federation of 7 emirates. Abu Dhabi, the island capital, is home to Sheikh Zayed Grand Mosque, with crystal chandeliers and room for 40,000 worshipers. Dubai is the site of ultramodern Burj Khalifa tower, enormous shopping centers and extravagant entertainment attractions.